Are you looking for a rewarding challenge? Your journey starts here. Join our close-knit team of dedicated professionals who work collaboratively to support those with spondyloarthritis. If you are interested in embarking upon a new chapter within your professional career, check out our current opportunities below! Don’t see a current fit but still really want to join us? Email HR@spondylitis.org and include your resume. We’re always looking for passionate and talented people. We’ll be in touch for future openings. 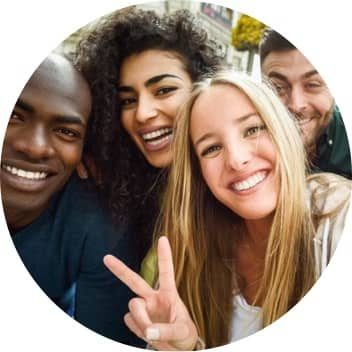 We are always on the lookout for great interns and volunteers! If you would like to get a taste of what it’s like working for the SAA, please email info@spondylitis.org with your resume and a few sentences explaining why you would like to work with us.

We also have a page for volunteers who are interested in fundraising on behalf of SAA. Please visit our fundraising page for more information.

Helgi Olafson, 2018 Triple Crown of 200s finisher is looking forward to pushing his limits once again in what will certainly be a battle to keep one foot in front of the other to complete such a daunting attempt. Helgi aims to not only run the Triple Crown of 200s in 2021, but also to run between the three races to connect them all by foot within the 68-day span from the beginning of Bigfoot 200 until he finishes at Moab 240.

This is a fundraiser for the Spondylitis Association of America and we hope this project brings together not only those who have ankylosing spondylitis and arthritis, but also anyone with the interest in living healthy and active lifestyles, where mindful exercise is at the forefront. The community will grow stronger as the project unfolds and SAA can’t wait to cheer Helgi on at the finish line.

Helgi’s project will have a few objectives. Raising funds for SAA is the first objective. The second objective is to create a documentary that will focus on the will to succeed despite the ever-changing and ever-challenging atmosphere associated with traversing deep forest, mountain and high dessert, where there are no invariables.

In order to be successful at this attempt, Helgi will need all of the help he can get. That’s why he is reaching out to the community for pacers and crew, particularly during the segments between the three races.

Pacers in general should come fully equipped with gear and supplies to run for the given day that they sign up for. If only one pacer signs up for that day, it is the pacer’s choice to run the entire day or just for certain segments. The important thing is that each pacer has transportation to where they would like to pace from as well as from where they want to stop pacing. Please refer to the Google Spreadsheet with all of the crew access points and comment in the slot where you are interested in pacing. Keep in mind that these dates will be changed to reflect the new 2021 dates, as soon as they are announced. Please note that some days, especially those during the Oregon PCT FKT and Nevada ADT FKT are VERY long days and may take more than 20 hours. The ideal situation for each day is that a team of two or more pacers with a vehicle switch on and off with driving, crewing and pacing for that day.

If the pacer would like to stay with us for a week or more, and doesn’t have a ride out, it is possible for us to make exceptions, as we have room to sleep/drive/feed four people in the designated crew vehicle and there will be room for at least one extra person at all times and at most two extra people. The vehicle would then be able to drop off pacers/crew at a nearby location close to the route where those folks would figure out their next steps in getting home. The main point here is that the crew vehicle needs to focus on moving forward along the route and giving aid to Helgi and his current pacers.

Folks who are interested in crewing should have their own transportation and may join at any crew access location. Please also refer to the Google Spreadsheet for these locations and comment in the slot where you may be interested in crewing. These dates will be adjusted slightly to the new dates for 2021 once announced.

*** If Crew or Pacers are interested in pacing or crewing long term (a week or more) we will cover your food and offer you a place to sleep and may even be able to pay for return transportation. Please reach out with your thoughts regarding what time and energy you feel you are able to donate to this project. We need your help. Thanks so much!

Sign Up
Learn More About the Triple Crown of 200s

The Public Affairs intern will support the Director, Brand Experience & Public Affairs. This hands-on position provides the right candidate with the opportunity to develop into a skilled strategic communications professional. The required time commitment for this opportunity is 10 – 15 hours per week for college credit and an annual stipend of $500.

For immediate consideration, please email your resume and cover letter to jason.blackwell@spondylitis.org

The Digital Marketing intern will support the Director, Brand Experience & Public Affairs. The right candidate for this opportunity has both a creative and analytical mindset and will participate in various online marketing campaigns. This hands-on internship could provide the right candidate with practical training as a Digital Specialist for future opportunities in PPC, SEO, display, email and social media. The required time commitment for this opportunity is 10-15 hours per week for college credit and an annual stipend of $1000

For immediate consideration, please email your resume and cover letter to jason.blackwell@spondylitis.org

The Programs Intern will support the Director of Programs & Programs Coordinator. This hands-on internship provides the right candidate with the opportunity to develop into a skilled and strategic program management professional. The required time commitment for this opportunity is 10-15 hours per week for college credit.

For immediate consideration, please email your resume and cover letter to programs@spondylitis.org