Non-radiographic axial spondyloarthritis, or nr-axSpA, is a form of arthritis in the family of spondyloarthritis diseases. Nr-axSpA primarily affects the spine, but other parts of the body are also often involved. It causes inflammation in the spine and elsewhere that can lead to various symptoms including pain and stiffness.

Here is a breakdown of the terms associated with non-radiographic axial spondyloarthritis:

What is Nr-axSpA? Introducing SAA’s newest animated awareness video. Watch as we discuss common signs and symptoms of nr-axSpA, and share helpful information and resources for those impacted.

We thank UCB for their financial support of this educational video. SAA is solely responsible for the content of this video.

The primary feature of nr-axSpA is the involvement of the sacroiliac (SI) joints, which are located at the base of the spine, where the spine joins the pelvis. Nr-axSpA can also cause inflammation, pain, and stiffness in other areas of the body such as the neck, shoulders, hips, ribs, heels, and joints of the arms and legs. Inflammation can also impact the eyes (causing iritis or uveitis), the skin (causing psoriasis), and the gut (causing intestinal pain and other problems).

One key takeaway from recent research is that pain, stiffness, and other symptoms are as severe in people with nr-axSpA as they are in those with ankylosing spondylitis. 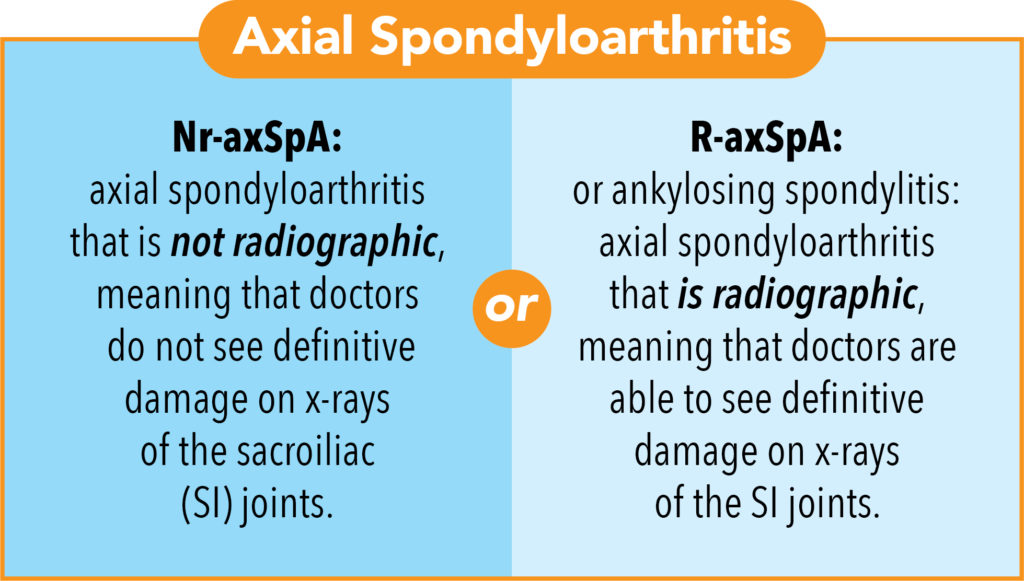 The first symptoms of nr-axSpA are often described as persistent pain and stiffness in the lower back and buttocks, which come on gradually over the course of a few weeks or months. At first, discomfort may only be felt on one side, or alternate sides. The pain is usually dull and diffuse, rather than localized. Sometimes, these symptoms can be severe. A person’s sex can affect the location of initial pain in nr-axSpA. For some women, the neck and peripheral joints are often affected first, whereas in men it is more likely to be the lower back.

A rheumatologist is generally the type of physician who will diagnose and treat nr-axSpA. A rheumatologist has special training in diagnosing and treating disorders that affect the joints, tendons, ligaments, connective tissues, muscles, and bones. Unfortunately, there is no clear diagnostic test for nr-axSpA. This means that a thorough physical exam by a knowledgeable doctor, along with proper blood tests, consideration of family history, and imaging when appropriate are truly key.

While knowledge and awareness of this condition have grown in recent years, unfortunately, many people still go undiagnosed for years, visit numerous physicians with no answers, and are even misdiagnosed with something else before arriving at their nr-axSpA diagnosis. Various factors contribute to an average diagnostic delay of 7-10 years, which translates to delays in accessing effective treatment. This is why visiting a rheumatologist is so important.

Is There a Cure?

There may be no cure yet, but that doesn’t mean there’s no help. Important recent advances have offered more insight into what triggers the condition, and how best to treat it. A holistic approach to nr-axSpA, which treats the whole person, includes exercise, wellness practices, stress management, good nutrition, and medications when you and your doctor determine them to be appropriate.

It is estimated that roughly 1.6 million adults in the U.S. have nr-axSpA (while 3.2 million people have axial spondyloarthritis in general). Nr-axSpA and related conditions often start in young people, usually under the age of 45. They can also sometimes occur early in life, in juveniles (these cases are called juvenile spondyloarthritis).

The male to female ratio in nr-axSpA is close to 1:1. Recent studies have found that women are slightly more likely to have nr-axSpA, with demographic reviews showing that 55%-60% of those with nr-axSpA are women.

The HLA-B27 genetic marker is associated with spondyloarthritis, including nr-axSpA. This association is especially strong in Caucasians: while the marker is found in 7.5% of the general Caucasian population, it is found in up to 70% of Caucasians with nr-axSpA. The gene prevalence varies in other ethnicities.

While testing for the gene can be helpful in making a diagnosis, it is not a diagnostic test. It is simply one possible tool in the search for a diagnosis.

The severity of nr-axSpA varies greatly from person to person, and may change from day to day. Some may experience only intermittent pain and discomfort, while others may experience severe pain and stiffness in multiple areas of the body for long periods of time. As noted earlier, 5% to 30% of those with nr-axSpA will progress to having ankylosing spondylitis. It is recommended to see your rheumatologist at least once a year, even when nr-axSpA symptoms are mild and well-managed.

The future looks promising for people with nr-axSpA. We have learned much about the causes of the disease, and new treatments have been introduced that appear to not only reduce the symptoms, but can also slow progression.

Read SAA’s most comprehensive primer on nr-axSpA, including up-to-date information about symptoms, prevalence, treatment options, and getting a proper diagnosis.

“Non-radiographic axial spondyloarthritis” is a mouthful. It is difficult to say, and even more difficult to understand for many…