The Diagnostic Prevalence of AS…

The Diagnostic Prevalence of AS and axSpA Are Rising in the U.S. What Does It Mean?

An interview with Atul Deodhar, MD, rheumatologist, professor of medicine, and member of SAA’s Medical and Scientific Advisory Board

Two recent studies have come out pointing to the same conclusion: The diagnostic prevalence of ankylosing spondylitis (AS) and, more broadly, axial spondyloarthritis (axSpA, which includes AS and non-radiographic axial spondyloarthritis) are going up in the U.S. But what does this mean? Are these trends significant? Where are the numbers highest and lowest, and what can these findings tell us?

SAA sat down with Dr. Atul Deodhar, who was deeply involved in both studies. Many thanks to Dr. Deodhar for sharing his knowledge and enthusiasm.

Spondylitis Plus: Let’s begin with the basics. What is diagnostic prevalence? What is population prevalence? And how do both differ from incidence?

Spondylitis Plus: Let’s discuss the study published in September 2021, “The Annual Diagnostic Prevalence of Ankylosing Spondylitis and Axial Spondyloarthritis in the United States Using Medicare and MarketScan Databases,” on which you were the senior author. What was the aim of this study, and how was it carried out?

We wanted to find out the diagnostic prevalence of AS and axSpA in the U.S. The diagnosis could be made by a primary care doctor, a rheumatologist, or by any provider. The diagnosis might be entered when the patient is discharged from a hospital as well.

Spondylitis Plus: You saw an increase in the prevalence of both AS and axSpA, correct?

Even though axSpA starts in young people, in Medicare the diagnostic prevalence was higher, because we are catching older people in the Medicare database who have had this disease for many years. In the younger MarketScan population, there may be more people who haven’t been diagnosed yet. However, in both populations the annual prevalence kept going up from year to year.

Spondylitis Plus: Were the results surprising to you? Why do you think the prevalence is steadily going up?

We were totally surprised. Is this disease getting more common? We don’t think so. We believe it is more likely because of better awareness and better recognition by providers. It is because of the work that SAA and other groups are doing in physician education. Rheumatologists and primary care providers are getting more educated and better versed in axSpA, SPARTAN (Spondyloarthritis Research and Treatment Network) members are doing lectures all over the country, there are more CME courses, pharma companies are developing new medications. Certainly, there is much more interest in these conditions. So, we think the rising prevalence is mostly because of increased disease awareness. Another factor could be the availability and use of MRI. We are doing more MRIs, which help diagnose more people. But mainly, we think the rising numbers are due to the increase in disease awareness.

The other surprising finding was that the diagnostic prevalence was still very, very low compared to the population prevalence found in the NHANES study. In the NHANES study, remember, the prevalence was about 1%. Here, in Medicare, the best prevalence number was 0.06% in 2014. In MarketScan, it was 0.02%. This is woefully low. This means that there is still a lot of work that needs to be done. If population prevalence is 1%, but diagnostic prevalence is 0.02%, what does that tell us? That tells us that people are either not going to the doctor, or they are going to the doctor but their condition is not getting recognized.

Our aim is to get the diagnostic prevalence as close as possible to the population prevalence. It will never be the same. Sometimes people don’t go to the doctor because they don’t have health insurance, so they’re not captured; sometimes they are misdiagnosed. But we want these numbers to be close, and we are inching in that direction.

Spondylitis Plus: It looks like the diagnostic prevalence of comorbidities is also going up—hypertension, diabetes, and coronary heart disease. Why might this be?

We know that people with inflammatory arthritis have increased risk of metabolic syndrome, which includes diabetes, hypertension, obesity, high cholesterol, heart disease, etc. As our understanding grows, doctors are more aware of these correlations, and screen for them more.

Spondylitis Plus: What trends did you see in how AS and axSpA are treated?

We looked at the use of different treatments for these conditions. The most worrisome thing was opioid use. In the Medicare population, 75.5% were on an opioid. In the younger MarketScan population, it was 54.8%. These numbers are astounding. Then we looked at glucocorticoids—in the Medicare population it was about 45%. Yikes, this is not good! Glucocorticoids should not be used in the treatment of axSpA. [Editor’s note: See SAA’s “2019 Axial Spondyloarthritis Treatment Recommendations: A Brief Overview for Patients and Families” for a full explanation of recommended treatment options.] The use of biologics went slightly up, which is a good thing. But a lot of work still needs to be done, A) in diagnosing, and B) in education regarding the appropriate treatment of axSpA.

So, there were some eye-opening findings in this study. Diagnostic prevalence is going up, which means people are recognizing these conditions more, but there are still many undiagnosed patients. I think this is an important study that tells us what is really happening in the U.S.

Spondylitis Plus: Let’s move onto the second study, published in December 2021, “Geographic Variations in Diagnosis and Treatment of Ankylosing Spondylitis in the United States: A Real-World Study,” on which you were the lead author. What did you look at here?

After the first study, the next question was this: The U.S. is a big country. Is the diagnostic prevalence uniform everywhere, or does it vary in different parts of the country? We studied data from 2014-2019 in the IBM MarketScan database, and in this study, we looked at only AS, not axSpA. We looked for the diagnostic codes of 720.0 or M45.X. And we looked at different states in the country.

We looked at racial distribution, because the prevalence of AS depends upon the prevalence of the HLA-B27 gene in that population. The white Caucasian population has more HLA-B27 than the Black population, for example, so states with higher white populations will have higher AS prevalence. Idaho, which we found has the highest diagnostic prevalence of AS, has many more white people compared to, say, Mississippi, where the Black population is higher. Another important factor is the availability of rheumatologists in a given state. If you have fewer rheumatologists in a state per capita, then there will be fewer diagnoses.

Spondylitis Plus: What did you find in this study—where is the prevalence of AS highest and lowest?

The interesting point we found was age, sex, racial distribution, or number of rheumatologists per capita did not explain state-to-state variability in the prevalence of diagnoses made by rheumatologists. We corrected for that statistically. We think it has to do with awareness, again. In certain states, there needs to be more education.

Spondylitis Plus: Can you talk about the prevalence of AS and axSpA among women specifically? It seems these numbers are also going up.

The proportion of women diagnosed with AS increased 3-5% between 2014-2019. Women constituted up to 45-50% among all patients diagnosed with AS in 2019, depending on which of three definitions of diagnosis we used. Overall, AS diagnoses are still more common in men.

The prevalence is going up among women because there is more awareness that women get this condition. Again, it’s not because suddenly more women are “catching” this disease, it’s because of the medical community’s increased understanding.

Spondylitis Plus: Why are studies like this important, and why are they needed now?

The only other big study previously done in the U.S. was the NHANES study. It’s the gold standard. I don’t think it will be repeated for a very long time. Only the federal government can take on a big and expensive population prevalence study like that.

We wanted to do these studies because when we are educating our colleagues, and we say axSpA is more common than rheumatoid arthritis (RA), some say, “Nonsense, RA is much more common in my patient population. I don’t have axSpA patients.” That is when we show them these prevalence data. It makes a difference. 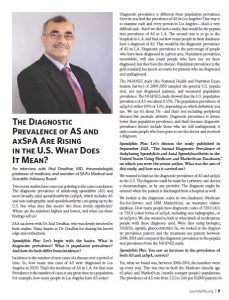