To help understand the cause of spondyloarthritis (SpA), this study investigated the microbiota of children at increased risk of developing SpA based on a family history of ankylosing spondylitis (AS) and HLA-B27 status.

Dr. Gensler’s research group analyzed the intestinal microbiota of the offspring of patients with AS. The offspring were further divided based on HLA-B27+/- status. F. prausnitzii was the key organism associated with HLA-B27+ status.

The research team also evaluated the microbiota in the offspring diagnosed with SpA and those without disease. The offspring in this category all had HLA-B27+ status. Notably, B. fragilis was associated with juvenile SpA patients, and F. prausnitzii had a higher abundance in those without SpA.

While F. prausnitzii was associated with HLA-B27+ status, it was depleted in juvenile SpA patients. This suggests that although HLA-B27 status can influence the microbiota, this alteration may not influence the development of SpA.

This study used data from an online survey to access common concerns of Spondyloarthritis including ankylosing spondylitis and COVID-19.

Another concern was HLA-B27 status and increased susceptibility or severity of COVID-19 infection. Data collected from over 3400 patients showed neither an increased risk nor protective effect against COVID-19. The same data also revealed B27 status did not affect COVID-19 symptom severity.

This study also revealed that HLA-B27 status was negatively associated with axial spondyloarthritis (AxSpA) symptom severity. Plainly, AxSpA patients without HLA-B27 reported more severe disease than HLA-B27 positive patients. This reporting is opposite to the relation with HLA-B27 and ankylosing spondylitis (AS). Further, HLA-B27 is associated with lower disease activity in AxSpA and higher disease activity in AS.

This project develops a classification criteria for axial JSpA that will enable identification of a more homogeneous group representative of children with SpA and axial disease for entry into observational or clinical trials. The deliverables for this project was to perform a multi-criteria decision exercise to determine the final criteria and relative weights of the axial disease criteria.

Microbiome Produced Indole in the Expansion of ILC3s in SpA

This study addresses why the microbiome is important in the development of spondylitis.

While microbiome studies identify differences in specific bacteria, a common bacterium has yet to emerge as a pathogenic factor in SpA. Focusing on the differences in how the microbiome as a whole functions, Dr. Kuhn’s research group has identified a link to the way dietary tryptophan is broken-down into inflammatory chemicals by the microbiome of individuals with SpA. Her group is evaluating how these inflammatory chemicals derived from tryptophan influence immune functions that lead to arthritis.

This study combines translational observations from a study population of people with AS with mechanistic wet-bench studies aiming to address the immunologic consequences of microbiome changes in patients with SpA. The study provides an important foundation to address why the microbiome is important in the development of SpA.

Incidence of and Risk Factors for Spondyloarthropathies among Active-Duty U.S. Army Soldiers

SpA represents a potential, silent cause of back pain among some who serve. Unfortunately, research on SpA among military service members has been minimal, and researchers found no data on the incidence of this disease or its risk factors in the US military prior to their study. This is a glaring information deficit in light of the impact of back problems on military disability. Gaining a better understanding of the rates and predictors of SpA and its associated functional outcomes in military populations could be important due to the exposures associated with military service.

Doctors Lianne Kurina, Michael Weisman, Alan Nelson, and Robert Kaplan found that in strong contrast to prior studies and conventional wisdom about a male predominance in SpA, researchers found that adjusted odds of SpA were very similar in men compared to women in this active, regularly-screened population with universal health care.

nr-axSpA is a type of spondyloarthritis that has the features of ankylosing spondylitis (AS) but does not have significant enough damage to the sacroiliac joint that is visible on plain x-rays to be easily classified as AS.

Delayed diagnosis of axial spondyloarthritis (axSpA) is well documented; little is known about the diagnostic journey and impediments for US people with non-radiographic axSpA (nr-axSpA). It is hypothesized that impediments are varied and exist at both the healthcare provider (HCP) and patient levels. This study sought to understand patient experiences and contributors to delayed nr-axSpA diagnosis in the US.

In this mixed-methods study (qualitative and quantitative) of impediments to nr-axSpA diagnosis in the US, delayed diagnosis was common. Among surveyed patients, median time to diagnosis was 3.25 years, yet more than 20% had undiagnosed symptoms for over a decade. Diagnostic delay disproportionately affected women and patients living in rural areas. Barriers to timely diagnosis included patient tolerance for chronic pain, symptoms other than hallmark chronic low back pain prompting care, and episodic symptom flares seemingly related to strenuous activity. Furthermore, HCPs are typically unfamiliar with axSpA or hold outdated perceptions that contribute to delayed diagnostic testing and rheumatology referral, and qualified rheumatologists who understand axSpA are limited in number.

Dr. Rosenbaum’s research assessed the impact of ankylosing spondylitis (AS) on quality of life across physical, discomfort, social, and emotional domains. This study surveyed 716 patients suffering from AS in the United States. Research revealed that sex differences showed a greater impact of AS on quality of life in women versus men, with the most significant impact in the physical domain. This study identifies the impaired quality of life aspects for future improvements in AS treatment. Prior Life Impact Studies were conducted in 2002 & 2011. Plain language summary by Joseph Stenberg. 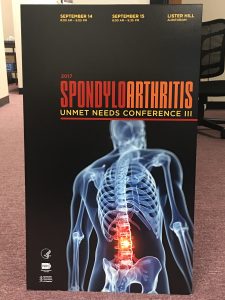 For two days in September of 2017, the Spondylitis Association of America brought together an international group of leading researchers to the National Institutes of Health (NIH) in Bethesda, Maryland, to identify pressing gaps, share insights, discuss scientific and treatment issues, and provide direction for the next decade of spondyloarthritis research. The Spondylitis Association of America and the National Institute of Arthritis, Musculoskeletal and Skin Diseases

Does the Microbiome Cause Ankylosing Spondylitis?

SAA Medical Board Member James Rosenbaum, MD, posed this question in SAA's news magazine, Spondylitis Plus. Since that article was published, SAA has assisted in funding his research to test his hypothesis.

Prevalence of AS & Online Screening Tool in the USA

The concept of inflammatory back pain (IBP) evolved in the 1970s, coincident with the discovery of the HLA-B27 association with ankylosing spondylitis (AS), leading to the development of criteria to determine the presence of IBP. The concept of IBP and it relationship with AS and axial spondyloarthritis (AxSpA) has further evolved, and an instrument developed (the Spondylitis Association of America Back Pain Tool), which was further modified and field tested for use in the 2009-2010 National Health and Nutrition Examination Survey (NHANES). This has shown the frequency of chronic back pain to have risen to 19.4%, with nearly one-third having IBP. The prevalence of AxSpA has been defined at 1.0-1.4% and AS at 0.52-0.55%. The national prevalence of HLA-B27 in the U.S. is 6.1%, and intriguing data from NHANES 2009 suggest a decreasing frequency with increasing age. From this arise new questions and a work agenda ahead.

Dr. Lianne Gensler is a rheumatologist at the University of California, San Francisco (UCSF) Medical Center and the Director of the Ankylosing Spondylitis Clinic. Dr. Gensler, Dr. Matt Stoll and Dr. Matt Brown were selected to receive funding for their MOSAS research study.

Multiple genetic and environmental factors result in the development of SpA diseases, including ankylosing spondylitis. In this study, Dr. Gensler et.al will evaluate children at increased risk of developing spondylitis based upon a family history of AS and positive HLA-B27 marker, comparing them to their HLA-B27 negative, and thus lower-risk siblings as well as to their disease-free parent. This will be the first study of its kind to evaluate the pre-disease microbiota in patients with a higher likelihood of developing arthritis.

Fungus/Yeast in the Pathogenesis of SpA

Drs. Mark Asquith and James Rosenbaum’s research focuses on the potential role for fungus or yeast in the pathogenesis of spondyloarthritis. Microbiota is the community of micro-organisms that inhabit the interior and exterior of the human body at various tissue sites. Drs. Asquith and Rosenbaum’s research utilizes fungal microbiota to investigate a novel therapeutic strategy to reduce or prevent disease symptoms in AS patients.

Recommendations for the Management of Axial Spondyloarthritis

The American College of Rheumatology (ACR) has released new recommendations for the treatment of ankylosing spondylitis (AS) and non-radiographic axial spondyloarthritis (SpA). The guideline was developed with the Spondylitis Association of America (SAA) and the Spondyloarthritis Research and Treatment Network. It summarizes recommendations for both pharmacologic and non-pharmacologic treatments, including rehabilitation, management of patients with comorbid conditions, use of certain surgeries, and approaches to patient monitoring.

SAA has seeded a national patient registry on ankylosing spondylitis. By combining three existing patient databases that have been used in research, the composite database can look at thousands and potentially tens of thousands of patients and be able to track health trends, disease severity over time, age, gender, race, and many other factors to improve understanding of the disease.

Watch for Updates in Our News Section

The Spondylitis Association of America has funded and helped create a state-of-the-art workshop for rheumatologists and radiologists called “Magnetic Imaging Workshop in Spondyloarthritis (SpA).” The purpose of this certified Continuing Medical Education program is to educate radiologists and rheumatologists in spondyloarthritis imaging and to promote earlier diagnosis in SpA.

Molecular Basis for the Association of HLA-B27 and Ankylosing Spondylitis

SAA has helped fund the research of Joel Taurog, MD, into the association between HLA-B27 and ankylosing spondylitis. Dr. Taurog serves on SAA’s Medical and Scientific Advisory Board.