Possible Complications: How Is a Person Affected?

Although ankylosing spondylitis (AS) and the family of related diseases called spondyloarthritis (SpA) primarily affect the spine, other areas of the body can also be involved. Spondyloarthritis does not follow the same course in everyone, even among family members. That said, there are some complications or symptoms that are more common than others. For instance, inflammation of the eye, or iritis, is very common, while neurological symptoms are very rare, and shoulder involvement appears somewhere in the middle. The chronic pain often caused from the inflammation can vary from person to person and range from mild to very severe.

Inflammation Where the Ligaments Attach to the Bone 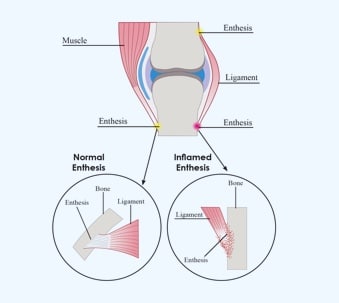 Inflammation of the entheses, where joint capsules, ligaments, or tendons attach to bone, is a hallmark of spondyloarthritis (SpA). This can be felt in multiple areas of the body, where doctors can check for pain and tenderness.

The sites are sometimes referred to as “hot spots.” They can lead to swelling and tenderness along the back, pelvic bones, sacroiliac joints, the chest, and the heel. The heel can be significantly affected, and the pain and tenderness can have a serious impact on a person’s mobility. The two areas of the foot that can be affected are the Achilles tendon, at the back of the heel and the plantar fascia, at the base of the heel.

What Happens over Time

It is the process of healing and repair following inflammation of the entheses that eventually can lead to scarring of the tissues, which subsequently can lead to extra bone formation. Thus, in someone with very severe disease, the process of inflammation can lead, over many years, to a bony fusion of the ligaments in the spine and sometimes in other joints as well, which is called ankylosis. This can cause an increased risk of spinal fracture because of the restricted range of movement and the fact that the bone formed during fusion is inherently weak. Not everyone will go on to this stage of spondylitis.

Fusion of the spine can sometimes lead to a forward curvature of the spine, called kyphosis, causing a forward-stooped posture. Although this can happen in the most severe cases of AS, it is now far less common given the advances in treatment.

It is important to follow your doctor’s instructions, take medicine on schedule, if prescribed, and maintain a daily exercise regimen, which, over time, will lead to better outcomes. It is also important to pay particular attention to your posture in order to reduce the risk of kyphosis. With the advent of biologics, there is reason to believe that the natural course of spondylitis may be slowed or halted. More studies are needed to confirm this. 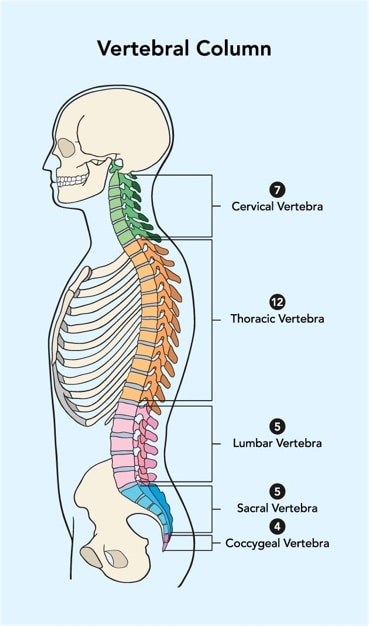 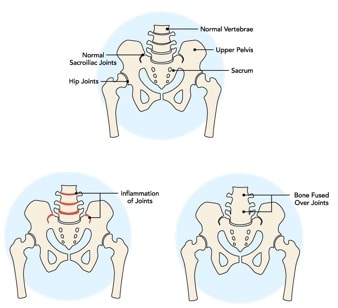 Adults with spondylitis often have chest pain (costochondritis) that mimics the heavy chest pain of unstable angina (acute heart attack) or pleurisy (the pain with deep breathing that occurs when the outer lining of the lung is inflamed). Anyone experiencing symptoms should seek medical attention to rule out a more serious condition. Over time, long-term inflammation of the joints between the ribs and spine, and where the ribs meet the breastbone in front of the chest, land scarring of tissue results in decreased chest expansion. If the pain is found to be spondylitis-related and you find yourself unable to practice critical deep-breathing exercises, which help maintain chest expansion, there are things that you can do to help yourself:

Once your doctor has ruled out more serious problems, it might be helpful to take a few sessions with a physical therapist or respiratory therapist, who can provide instructions on how to maximize air intake by learning a technique called “diaphragm breathing.”

About 15 percent of people with spondylitis experience inflammation of the jaw. This can be particularly debilitating, causing difficulty in fully opening the mouth to eat.

A small percentage of people with long-standing spondylitis may go on to develop rare, but serious complications. This is one of the reasons why it is important for everyone with spondylitis to be checked by a rheumatologist at least once a year. That way, any potentially threatening complications can be caught early and treated before permanent damage has occurred.

Rarely, people with advanced ankylosing spondylitis (AS) may have problems resulting from the scarring of the bundle of nerves at the base of the spine, called cauda equine syndrome. This condition can have a significant impact on a person’s quality of life, and can cause urinary retention and/or incontinence, loss of bowel control, sexual dysfunction, and problems causing pain and weakness of the legs. If you have long-standing AS and are suffering with some of these symptoms, your rheumatologist will be able to refer you to a neurologist for consultation.

Poor chest wall movement may result in decreased vital capacity. Some patients develop scarring or fibrosis at the top of the lungs which detected only by routine chest X-ray (recommended every five years unless there is a special need). Sometimes people have functional lung impairment, which means that it can take longer for colds and other upper respiratory infections to heal. Smoking is absolutely contraindicated in all forms of spondylitis.

Donations by members of the SAA, including our corporate member AbbVie, support our programs and services.

The Spondylitis Association of America is solely responsible for all of the content contained hosted on spondylitis.org.

Complications and Comorbidities in Long-Standing Spondyloarthritis

What cardiac related risks and potential complications should those with long-standing spondyloarthritis be aware of? What screenings are recommended for these issues?

What are the risks of osteoporosis and fractures in long standing SpA? Who is at heightened risk? Why?

Osteoporosis is a readily preventable complication of AS.

At some point in their lives, people living with spondyloarthritis may develop various complications. What are some of the more common complications? Which are rare, but serious issues to look out for?