“Non-radiographic axial spondyloarthritis” is a mouthful. It is difficult to say, and even more difficult to understand for many. Its abbreviation, “nr-axSpA,” does not roll off the tongue easily either. As it turns out, even some rheumatologists are confused about this terminology since the name literally means that it is axial spondyloarthritis (axSpA) with “normal x-rays,” though that is not accurate. The term also does not clarify x-rays of what? Sacroiliac joints? Spine? Does radiographic mean x-rays or maybe CT scans?

Here is the answer. Non-radiographic axial spondyloarthritis (nr-axSpA) and Ankylosing spondylitis (AS) are two sub-types of the condition axial spondyloarthritis. In nr-axSpA, the sacroiliac (SI) joints do not show “definitive” damage on plain x-rays, as seen in AS. That brings up the question of what is meant by “definitive damage on x-rays of SI joints?” This has been defined by the modified New York Criteria (see box 1 below). Probably the most important point to remember is that nr-axSpA and AS are really two ends of the same disease spectrum – one with less (or no) SI joint damage, and the other showing definitive damage. To match the “nr-axSpA” terminology, the Assessment of Spondyloarthritis International Society (ASAS) has proposed changing the name of “ankylosing spondylitis” to “radiographic axial spondyloarthritis” or “r-axSpA,” though this is not universally accepted. 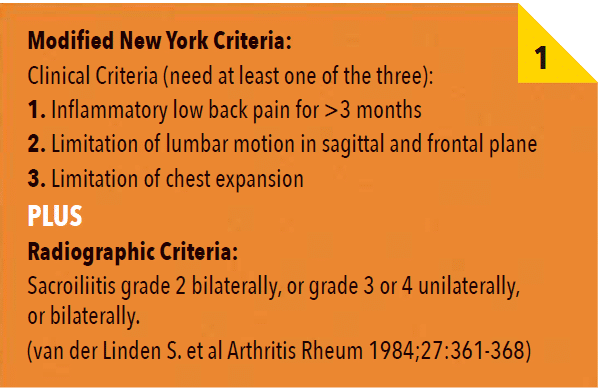 The advent of MRI technology in the 1980s made it possible to visualize active inflammation in the SI joints, which was not possible before, short of an invasive biopsy. MRI of the SI joints can show evidence of inflammation even before any changes on plain x-rays, and hence MRI scans made it possible to diagnose these patients early. This advance in imaging technology was part of the impetus to develop the 2009 ASAS Classification Criteria, which coined the terms axial spondyloarthritis and nr-axSpA for the first time. Just like the modified NY criteria defined “definitive damage” on SI joint x-rays, the ASAS Criteria put forth a definition of “positive SI joint inflammation” on the MRI (see box 2 below). Since then, it has been noted that while the MRI changes in SI joints are very sensitive, they are not very specific. Degenerative changes, heavy physical activity in professional or amateur athletes, and even normal healthy individuals may have “inflammatory changes” as defined by the ASAS Criteria in SI joints. It has therefore been suggested that structural changes such as sclerosis, fatty metaplasia and erosions, combined with inflammatory changes, should be sought to diagnose someone with sacroiliitis. 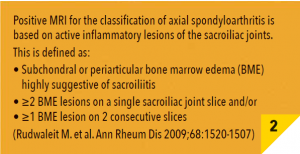 Is nr-axSpA the early stage of AS? Since all AS patients go through the nr-axSpA stage (when their SI joint x-rays were not “definitively” damaged), one can say so in some patients. However, it is also known that not all nr-axSpA patients progress to AS. Different cohort studies have found rates of progression from nr-axSpA to AS of 5% to 30% over 2 to 30 years.

Therefore, not all nr-axSpA patients are early AS. While we know that male sex, high level of C-reactive protein in the blood, and high degree of inflammation as seen on the SI joint MRI are the risk factors for progression from nr-axSpA to AS at a group level, it is difficult to predict such progression in an individual.

Expert rheumatologists, and even musculoskeletal radiologists, can differ in their opinion of the degree of SI joint damage on plain x-rays. In the absence of a gold standard, there is a lot of variability in reading the SI joint x-rays. Also, the typical signs and symptoms of axSpA, namely back pain, fatigue, morning stiffness, localized tenderness and soreness, do not depend upon the degree of SI joint damage. Several studies have shown that the disease burden in nr-axSpA is as severe as that in AS. Patients with very late stage AS with spinal fusion would probably have the worst function, but on average, loss of function and work impairment in nr-axSpA and AS are comparable. Because of all these issues, it may not be very important in daily practice to differentiate between AS and nr-axSpA, since they both deserve the same level of treatment and care. However, the regulatory authorities like the Food and Drug Administration (FDA) think otherwise. Since the term nr-axSpA was coined by the ASAS Classification Criteria for axSpA a decade ago, the FDA has had doubts about the natural history of nr-axSpA. The FDA required 52-week placebocontrolled studies on nr-axSpA patients from pharmaceutical companies for a separate indication of nr-axSpA for drugs that were already indicated to treat AS. Certolizumab pegol (Cimzia) is the first biologic medication to successfully complete the 52-week placebo-controlled study and earn an FDA approval for the indication of nr-axSpA.

How do rheumatologists make a diagnosis of nonradiographic axial spondyloarthritis? Like most diagnoses in rheumatology, rheumatology providers rely on pattern recognition. The signs and symptoms of nr-axSpA are not different from that of AS. In general, patients with nr-axSpA have chronic low back pain starting insidiously before the age of 40-45, the back pain usually has the “inflammatory back pain” character (improved with activity and not relieved by rest), and the patients may have other spondyloarthritis features such as peripheral inflammatory arthritis, iritis, psoriasis, inflammatory bowel disease, and family history of similar conditions. In contrast to AS, the x-ray of the SI joint will not show evidence of definitive damage, but presence of the HLA-B27 genotype, and MRI changes of active inflammation would clinch the diagnosis.

There are some differences in AS and nr-axSpA: the male to female ratio in AS is roughly 3:1, whereas in nr-axSpA it is 1:1. In nr-axSpA the frequency of HLA-B27 is lower, and the C-reactive protein level may be normal compared to AS patients. The management of nr-axSpA is very similar to that of AS. The American College of Rheumatology (ACR), in partnership with the Spondylitis Association of America (SAA), and the Spondyloarthritis Research & Treatment Network (SPARTAN), have recently completed an update of the treatment guidelines for ankylosing spondylitis and non-radiographic axial spondyloarthritis. These were published online in late August, and are available on SAA’s website.

This story was featured in our Fall 2019 Issue of Spondylitis Plus. Want to read the full issue? Log in or become a member today to gain access.