Ankylosing spondylitis (pronounced ank-kih-low-sing spon-dill-eye-tiss),  or AS, is a form of arthritis that primarily affects the spine, although other joints can become involved. It causes inflammation of the spinal joints (vertebrae) that can lead to severe, chronic pain and discomfort.

In more advanced cases this inflammation can lead to ankylosis — new bone formation in the spine — causing sections of the spine to fuse in a fixed, immobile position.

AS can also cause inflammation, pain, and stiffness in other areas of the body such as the shoulders, hips, ribs, heels, and small joints of the hands and feet. Sometimes the eyes can become involved (known as iritis or uveitis), and — rarely — the lungs and heart can be affected. 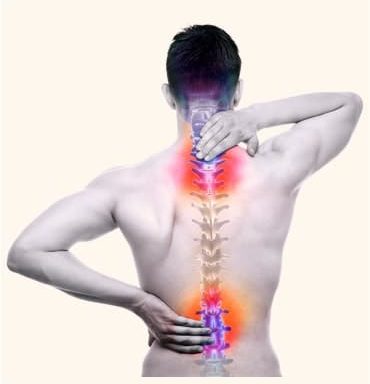 The hallmark feature of ankylosing spondylitis is the involvement of the sacroiliac (SI) joints during the progression of the disease. The SI joints are located at the base of the spine, where the spine joins the pelvis.

More information on ankylosis and iritis can be found in the Complications section.

It is important to note that the course of ankylosing spondylitis (AS) varies greatly from person to person. So too can the onset of symptoms. Although symptoms usually start to appear in late adolescence or early adulthood (ages 17 to 45), symptoms can occur in children or much later in life.

A rheumatologist is commonly the type of physician who will diagnose ankylosing spondylitis (AS), since they are doctors who are specially trained in diagnosing and treating disorders that affect the joints, muscles, tendons, ligaments, connective tissue, and bones. A thorough physical exam, including X-rays, individual medical history, and a family history of AS, as well as blood work (including a test for HLA-B27) are factors in making a diagnosis.

Is There a Cure?

Currently, there is no known cure for AS, but there are treatments and medications available to reduce symptoms and manage pain. Recent studies show that the newer biologic medications can potentially slow disease progression in some people. Note that different people respond to different medications with varying levels of effectiveness. Thus, it may take time to find the most effective course of treatment.

Although the exact cause of AS is unknown, we do know that genetics play a key role in the disease. Most individuals who have AS also have a gene that produces a “genetic marker,” a protein called HLA-B27. This marker is found in more than 95 percent of people in the Caucasian population with AS. It is important to note, however, that one does not have to be HLA-B27 positive to have AS. Also, a majority of people with this marker never develop ankylosing spondylitis.

Scientists suspect that other genes — along with a triggering environmental factor such as a bacterial infection, for example — are needed to activate AS in susceptible people. HLA-B27 likely accounts for about 30 percent of the overall risk, but there are numerous other genes working in concert with HLA-B27. Researchers have identified more than 60 genes that are associated with AS and related diseases. Among the newer key genes identified are ERAP 1, IL-12, IL-17, and IL-23.

One classic hypothesis has been that AS may start when the defenses of the intestines break down and certain bacteria pass into the bloodstream, triggering changes in the immune response.

The association between ankylosing spondylitis and HLA-B27 varies greatly between ethnic and racial groups.

Who Is at Risk?

The risk factors that predispose a person to AS include:

The Centers for Disease Control and Prevention’s NHANES study now estimates that at least 2.7 million adults in the United States have axial spondyloarthritis.

The severity of AS varies greatly from person to person, and not everyone will experience the most serious complications or have spinal fusion. Some may experience only intermittent back pain and discomfort, while others may experience severe pain and stiffness over multiple areas of the body for long periods of time. AS can be debilitating and, in some cases, lead to disability.

Almost all cases of AS are characterized by acute, painful episodes (also known as “flares”), which are followed by temporary periods of remission when symptoms subside.

It is important to know that ankylosing spondylitis is a chronic, or lifelong, disease and that the severity of AS has nothing to do with age or gender. It can be just as severe in women and children as in men.

Remember that even if you have AS and are experiencing only mild symptoms, which you are able to manage well, it is important to see your rheumatologist once a year in order to detect and treat any underlying complications.

Rheumatologist Dr. Muhammad Asim Khan and AS advocate Amber Panagos talk about making the most of your rheumatologist visits. They talk with Imagine Dragons lead singer Dan Reynolds for This AS Life Live!, a series that brings together people with ankylosing spondylitis (AS) to share stories, help inspire each other, and live their best lives.

Spondylitis Association of America (SAA): Can you describe the following blood tests and what they look for? Also, how...

My Surreal and Deeply Emotional Day

I did not see this coming. I bubbled up with tears of joy as I left a meeting room this afternoon. Here is the story...