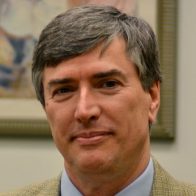 Larry was diagnosed with ankylosing spondylitis (AS) in 2008 when in his late 40’s. He was very fortunate to have been diagnosed within six months of the onset of major symptoms. In hindsight, symptoms started several years before but were attributed to other conditions. He has been through the usual course of medications: methotrexate, naproxen, and biologics. He now follows a No (Low) Starch diet and manages his symptoms with sulfasalezine, ibuprofen and Vitamin D supplements. This allows him to pursue life with few limitations.

In his youth, Larry was very active, enjoying running, biking, hiking and soccer. Adjusting to both AS and his advancing years has been challenging. Yoga is a new found joy. Hiking and biking needs to be added back to the routine. Larry lives with his wife, Joyce, whose support and patience in dealing with AS has been a blessing. They also have two daughters – one in college and one about to be. Thus far, neither have presented with symptoms of AS but we are monitoring this.