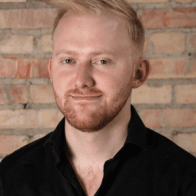 I was lucky to be diagnosed when I was going in for a checkup after a very minor car crash. I didn’t have any pain or anything, so I was surprised I was being diagnosed with something that sounded like cancer. In the first year after being diagnosed, I didn’t have any money for prescriptions, and I was getting sciatica, which required me to walk with a cane. Later on, using biologics has kept me more or less living like I used to. I’ve always been a healthy person (minus my diet) so it was a shock to me when I was put on immunosuppressants and I still would hardly ever get sick.

For the most part, it doesn’t impact my day to day. I can always feel it, especially when I’m due for another shot, or in the winter time. I was diagnosed with ankylosing spondylitis back in 2012, and then with Crohn’s two years later. That was more of an inconvenience in the beginning, but has overall benefitted my life.