MacKenzie Sheppard received a unique assignment from her English teacher: Do any project you like as long as it benefits the community. So she decided to help benefit SAA’s quest for the cure of ankylosing spondylitis by holding an event called, “Songs for Sisters” – a showcase of music arranged by her family in honor of her sister, DeLaney, who was diagnosed with AS two years ago. We spoke with MacKenzie about the fundraiser that ended up raising $5,050 for SAA. 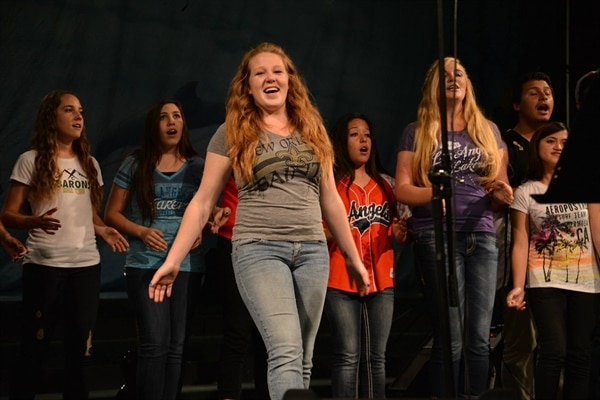 SAA: What motivated you to plan this fundraiser?

MS: As a high school student, I get assigned projects on a regular basis, but most of them have the same idea: read a book or write a report. This past year my English teacher assigned me a DIY (do it yourself) project, which had rather interesting directions. I had the opportunity to pick something of my choosing for my project as long as it benefited the community. From the start I wanted to sing for my project, and soon I thought close to home. My sister was diagnosed with AS almost two years ago and it has been rough each and every day. Though it has been difficult for such an athletic young woman, she doesn’t stop fighting. Day in and day out she pushes through the pain and battles the disease. She is so strong and such an inspiration. My sister DeLaney is the reason why I wanted to raise money for such a wonderful cause.

SAA: What was the event like? How did it go?

MS: The event itself was an amazing experience for everyone! We had all of our family there – aunts, uncles, cousins six times removed! Everyone was there and those who weren’t wished they were. We had almost 400 people in attendance and ended up raising over $5,000.

The best part of the night was in the middle of the concert. I had already explained to the audience what AS is and how it has affected my family. I was in the process of telling them how blessed I am to have such a beautiful, strong, inspirational sister to be able to do something like this for, but I couldn’t help the tears that poured down my face. The knot in my throat wouldn’t let me speak, but the one thing that came out was, “I love her.” At that moment my sister, DeLaney, ran on stage into my arms and gave me the greatest hug ever.

SAA: What tips do you have for others who are considering planning a fundraiser of their own?

MS: Stay organized! That was my best friend! I had to be ready for things to go wrong and have a backup plan. With the help of my closest friends and family, we were able to keep things going and put on a wonderful concert.

SAA: What would you like the world to know about spondylitis, and the people who have it?

MS: Keep fighting! Never give up! Though it may be difficult at times, there are people out there who are willing to stand up to Ankylosing Spondylitis. People like me. So stand with me and let’s do what it takes to find the cure for AS.