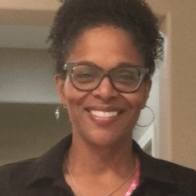 Roz, a native San Franciscan, is married and has five adult children and three grandchildren. A navy veteran, she resides in Merced, CA. She retired from full-time work on disability in 2014 and has been a passionate teacher of English as a Second Language (ESL) to adults ever since. She started the Merced group in 2019 and has been hosting online meetings since the beginning of the pandemic. She loves helping other spondies and wants the meetings to be informative and supportive because AS is a complicated and potentially debilitating disease.

AS runs in her family: her late father and brother had the disease, and she was finally diagnosed in February 2018 after having had symptoms for over 25 years. Since her diagnosis, she has become a patient advocate. She’s participated in support groups in-person and online and been featured in several A S awareness projects. She also reads everything she can about this disease and enjoys using this information to educate others and advocate for herself and other AS patients.

Today, she manages her symptoms with a smorgasbord of a biologic, Biofreeze spray, daily stretching, regular walks, massages, Toradol injections (as needed), and daily heating pad sessions. She also takes her mind off her pain with her favorite pastimes, which include spending time with her family, listening to music, traveling, doing jigsaw puzzles, and playing trivia and board games, cards, dominoes, and pool.