Live with the Knowledge That…

Live with the Knowledge That a Cure Is on the Way 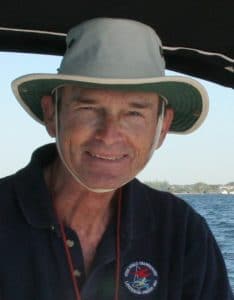 As a teenager, I learned to sail on Lake Allatoona, near my hometown of Atlanta. Since the day I first sailed on Allatoona’s waters, I was taken. Sailing gave me a sense of freedom, a sense of focus amid the challenges of the teenage years. It also gave me a sense of purpose and commitment, and it became a focal point of my life.

Returning from military service, I raced hard for 25 years, competing in nearly 90 races each year. My wife, Peggy, crewed for me, and I never once beat her across the finish line!

Then, in 1968, my world came crashing down. One day I woke up and could not get out of bed. It took doctors nearly two years to diagnose my ankylosing spondylitis (AS). The diagnosis and resulting treatment changed my life. I was initially treated with NSAIDs and finally with a TNF-blocker.

Twenty years after my diagnosis, my spine was fused to the point that I could no longer race. Not wanting to give up my lifetime passion, I became very active as a race officer and sailing judge, working national, continental and world championship regattas across the world, including a major role in the 1996 Olympic Games Yachting. I recently took a one-year sabbatical from race management and judging regattas to run my local Rotary Club in Atlanta.

When I was diagnosed with AS, it, needless to say, had a major impact on my life. The big thing I noticed, however, was how little people really understood about the disease. Unlike other diseases, not much research was being done on AS and related conditions. Then, I found the Spondylitis Association of America (SAA).

I learned about SAA through my rheumatologist. I kept looking for people with AS in the Atlanta area, figuring that with a population of some 5 million people, at least a few had to have AS. When SAA came to Atlanta for an educational seminar, I spoke to them about starting a support group for local AS sufferers. Thanks to SAA, I have been able to field questions from people with AS, get people together to talk about their challenges and successes, and hook people up with rheumatologists who specialize in AS.

When SAA needed funding, I was there for them, just as they were there for me when I needed answers to my questions about AS. I’ve been fortunate, and have done well in life (I was an independent insurance agent who wound up owning my own agency). I’ve always contributed financially to worthwhile causes, but I decided to join the Quest Legacy Society and leave money in my will for the Spondylitis Association because of the work they do to help AS patients and educate those who don’t know much about the disease. It is unimaginable to me that one might lack a sense of responsibility for the problems people face with this disease. As I said, I’ve been very fortunate; I know where I fall economically, and I can’t imagine not giving back.

My legacy gift to SAA is my way of saying “Thank You.” Thank you – in the words of SAA mission statement – for being a “leader in the quest to cure ankylosing spondylitis” and thank you for “empowering those affected to live life to its fullest.”

For more than 40 years, I have lived with ankylosing spondylitis. My body has been through a lot, but I have been lucky to have stayed as active as I have for as long as I have. I am making this legacy gift so that doctors and researchers can learn more about this disease and develop better treatments for people in the future. I am making this legacy gift so that others will not experience the disease as I have, but will live with the knowledge that a cure is on the way.

*SAA is saddened to learn that Means Davis passed away on July 9, 2021. He was a valued donor and partner of the SAA team. His contributions to the sport of sailing and to US Sailing spanned more than 45 years. His “passionate love,” Davis once said, was Optimist Dinghy racing, and he ran and judged events from club races to world championships. Means also contributed greatly to SAA’s mission and was a strong presence in the spondylitis community . His friendship will be greatly missed.