I want to share the story of my dad’s life and how his ankylosing spondylitis (AS) impacted him and our family, but ultimately how his exceptional spirit outshone his disease.

Dad first had twinges of back pain at age 19. He thought a fall during judo practice had misaligned something. Doctors couldn’t find anything significant, so life continued on. Dad and mum married, bought a farm and had children. It wasn’t until a young doctor noticed pitting in his fingernails that he was diagnosed with AS in 1973; he was 30 years old.

I have been able to pronounce “ankylosing spondylitis” ever since I can remember. But dad’s AS didn’t impact me much as a young child. I knew there were days that dad was sick, but no more than other peoples’ dads.

My dad, Bob Trenerry, worked hard for Qantas during the week, then built fences and sheds and looked after the animals on our farm on weekends. Unbeknownst to my brother and me, dad’s back had already started to fuse, making it difficult and painful for him to do such demanding physical labour.

Eventually, dad decided to go into business for himself, with mum’s support: of all things, a motel, which required his attention seven days a week and all hours of the day and night.

We moved from Melbourne, leaving our farm, to Mount Gambier, in South Australia. It was 1982 and the start of crippling pain for dad. At times he couldn’t walk further than a few meters, but as a testament to his strength and desire to succeed, he showed up and worked hard every day.

I remember taking a family trip to a motel convention when I was 12 or 13. Dad spent the entire five-hour drive with one elbow supporting his weight on the center console and the other elbow on the door, just to keep the car’s movement from jarring his back.

It was around this time that dad’s neck started to angle to the right and he could no longer keep from stooping forward. One of the last times I spoke with dad before he was admitted to the hospital, he was thrilled to share what his specialist had told him – that anyone diagnosed these days was very unlikely to become hunched over as he was.

After five years at the motel, dad and mum had worked so hard they were able to retire. Yet at a time when life was supposed to get easier, his AS was taking away more and more of his freedom. Dad could no longer turn his neck to see traffic, so he made the difficult decision at age 50 to stop driving.

I knew others noticed how dad stooped, and how his neck angled to the side, but I couldn’t see it – literally – unless I caught a glimpse of him in the mirror. Whenever dad met someone new, he would tell them, “I don’t want you to think I’m rude, but I can’t see you if you stand to my right.” No one ever said a bad word about dad; his personality always transcended any physical impairments.

Dad was a meticulous man who kept notes, receipts, and details on everything. Perhaps when you lose control over some aspects of your physical being, you overcompensate in other areas.

As time went by, dad started using a cane to get around. He later moved onto a walker, and eventually a wheelchair.

In his 50s, dad was diagnosed with IBS (we later learned it was Crohn’s). It pained him to give up many of his favourite foods. He also had a knee replacement due to increased pressure from his back. It sadly became difficult for him to leave the house.

Although mum and dad were impacted more than me by the day-to-day issues he faced, there are some things he told me that I will always remember. Before he was housebound, he said he used to keep rope in his pocket all the times, in case he needed to use the restroom and there was no handicap-accessible bathroom around; he could tie the string around the lock to lift himself up off the toilet. He must have had a hundred little “cheats” to help him cope with the world. (After dad’s death, mum found a list of all the handicap-accessible bathrooms within a 500km radius of the house!)

Once dad’s spine had completely fused, he was no longer in physical pain – he simply couldn’t move very much. Mum and I decided to take a trip overseas together so she could have a break from being his primary caregiver. While mum and I were in Paris, my brother called to tell us dad’s hip had given out and he had fallen. Dad had broken his back and was airlifted to the closest city. He would need a wheelchair and access ramps before he could come home.

It was at this point that life became hardest for dad. He needed nurses to help with showering, and needed mum to help him put on his shoes and socks. But even though his back was broken, his spirit never was. He joked with his grandchildren, “You’ll need to write your names on your shoes, because otherwise I don’t know which one you are.” Eating became difficult for dad – his neck was bent so far forward he had trouble swallowing his food.

Mum was by his side for 53 years. She devoted her life to enable him to live his to the best of his ability, something for which my brother and I are so grateful.

Recently, mum called to say dad didn’t seem quite right. I spoke to him and knew something was wrong. I suggested she call an ambulance, and dad was admitted to the hospital. I arrived the following day (I live five hours away) and the doctors told me that because dad was so hunched over, his lungs were crushed and he couldn’t take in enough oxygen. They put him on a ventilator. At one point, they took dad off the machine for a short period to let him rest. The first thing he did when he was free of the mask was to tell the doctors what a fantastic job they were doing and how much he appreciated their work.

I had always known that my father was a quality man, but at that moment it couldn’t be clearer, and everyone in that hospital room knew it, too.

Dad’s oxygen levels didn’t improve overnight and when we arrived at the hospital the following morning, we were told that his heart, kidneys, and other vital organs were shutting down. His crushed lungs had led to pneumonia and soon he would go into catastrophic organ failure.

As dad took his last breaths, my mother, brother and I cheered him out of the world, telling him that we could not be prouder of him.

I have so many stories about my dad that I could share with you. I recently found a notebook with thoughts he had jotted down. On one page, he wrote this:

“Aims for the day”
1. Don’t complain – if I feel grumpy or angry, remove myself from everyone until I feel better.
2. Achieve something, but if I can’t, there is always tomorrow.
3. Make sure my wife knows that I love her.

Dad used to say to me that his AS took the “ings” from his life – running, walking, driving, jumping. But the truth is that it didn’t. When I think of my dad, there are lots of “ings” that he had in bucketloads – loving, caring, sharing, laughing, appreciating, thanking, and giving. My dad was an absolute champion. He just happened to have AS. 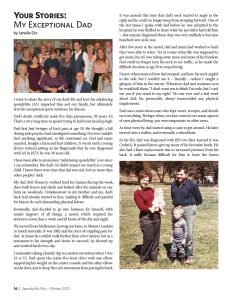 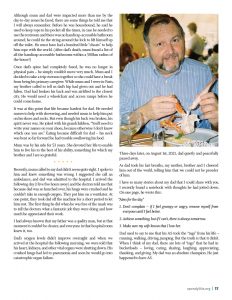 Diet and Exercise: My Game Changer

I noticed that whenever my stress and anxiety levels increased, my inflammation markers started to climb, too. I read several books about the immune system…

I want to share the story of my dad’s life and how his ankylosing spondylitis (AS) impacted him and our family, but ultimately how his…

I Was the Fat Kid

There comes a time in every person’s life when they adopt what they come to believe about themselves. At some point in my childhood, I…

Lifting the Weight of AS

I used to be a very angry person because I hurt all the time. Now, it takes a lot to even make me agitated. I’m…

Spondyloarthritis, My Support Systems, and Me

When I was nine years old, I went to the doctor for a mysteriously swollen knee, one that I couldn’t remember hitting on anything and…

Spondyloarthritis: A Story of Math, Disconnection and Pain

I feel more and more detached, yet I have high hopes. I keep praying. Without prayers I can…