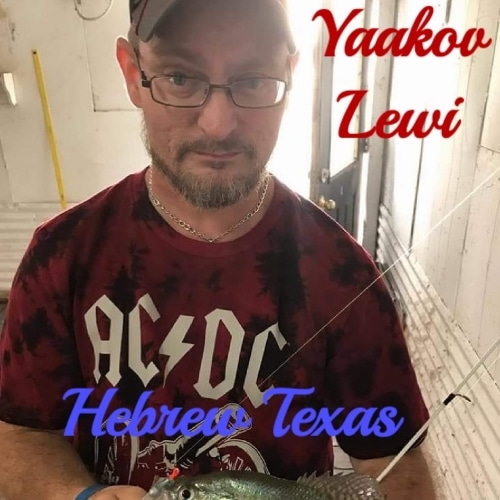 My name is Yaakov Aharon Lewi which is Hebrew for Jacob Aaron Levi. I am 42 years of age. Not only does my name have a religious meaning but it’s a family legacy going back thousands of years. I’m a native Texan, born in Waco. I am Jewish by faith and Hebrew by blood.

I was a very active child, getting into normal mischief. But on a downside, I was a very hyper child caused by the AS, that we did not know of at the time. My AS onset at a preteen age. My mother would take me to the doctor, but the doctors would just chalk it off as to me just complaining.

Around 15, I started bull riding and yet again the doctors chalked it off due to injuries. I continued bull riding until around the age of 21.

At the age of 18, I opened Moose’s Custom Paint & Body. As well as working manual jobs to make ends meet. Which caused a lot more pain and less mobility, but I still was not able to find out what was going on with my body.

At the age of 25, it got to the point where the doctors told me that I needed to stop working or I would end up putting myself into an early grave by the age of 30. But at 25, I had my third child but couldn’t see myself not working.

Between the age of 25 and 30, in the midst of being a father, workaholic and dealing with life’s ups and down, I met a man named Chris Burnett, who is like a brother, has become one of my biggest supporters. And as a thank you to him and his family, I would like to give a shout out to C&J Vinyl Designs. Please check them out and their beautiful designs.

By 2006, I was in the middle of painting a car, while having a customer watching because they were curious about the process. I noticed that on that morning the pain was the worse it had been, but having a customer watching, I painted the car anyways. In the middle of the paint job, I passed out from the pain. And that was my final straw, I had no choice but to close my shop.

In the process of dealing with what was going on with my body and dealing with a bad marriage, I had to move in with my mother. My mother pushed me to get on social security. The SS doctor diagnosed me with AS. He handed me paperwork on AS and said here this is what you’re dealing with. Basically saying that I have a long hard road ahead of me.

My mother and I began researching and learning everything we could about it. Which was very difficult due to the fact that not much was out there and hardly any doctor knew anything about AS. I’ve tried just about every product and medication that my doctors have thrown at me and nothing has worked.

The hardest part about the disease is that at one point, I was a very active outgoing person and the disease forced me to seclude myself from others due to being stereotyped and made fun of.

I met a wonderful woman who is now my wife. Michele has been a great support and has taught me new ways of doing research on things. She is always telling me that I am not like others. She tells me that I don’t let anything get me down. No matter how much pain I am in, it doesn’t stop that me from living my life.

Throughout all this, I am not always able to get out and do the things I am passionate about. When I am able to, I fish. Which brought me to find a greater passion for crappie fishing. We went through many baits and companies that did not have a durable bait. Having a strong desire to make people happy and see them smile, I forced myself to become social again.

Which drew us to the point where Hebrew Texas Fishing Lures comes in. We have discussed many things about the business. We wanted to do things that make us stand out and draw people to us.

With the suggestion of me being Hebrew and a native Texan, and of course making fishing lures, is how the name of our company came about. I became the face of team HTFL. We started the company with nothing, forcing it into our budget to get it started. Which brought us to meet a bunch of wonderful amazing people. There are too many names to name, but our pro and field staff are amazing and have supported us from the beginning and are our longest standing customers. Which has to lead us to be one of the top small companies in Texas, with the largest selection of colors. We have branched out to many states and even into Puerto Rico.

The main point of starting the company was to look for something to do to forget the pain and to secure a future for my family. We are coming up on HTFL’s one year anniversary. I’ve always wanted to give back to the community and support organizations that don’t normally get noticed. What a better way to bring in the year than with a fishing fundraiser tournament.

My wife found SAA’s page and I called and talked with Sean Ewert. It was a pleasure to talk with a bright and enthusiastic person. He was able to help us with planning our event. Hoping this can turn into an annual event.

My advice to those that suffer, is mind over matter. Meaning, to find something to occupy your time so you are not focused on the pain. And to live like there is no tomorrow.

I don’t want to be a success story, I want to be seen as a man who proves that you can live AS and lead a normal life.