The first time I complained to my doctor about pain in the morning was around 16.  His response was “Most people wake up with some pain in the morning. It’s completely normal”.  For years I felt like a weak human as I watched people my own age thinking; how can most of these people wake up in this much pain and still be happy?  What was wrong with me?  Why wasn’t the suicide rate so much higher? Over the next five years this same doctor treated me for back pain, hip pain, knee pain and foot pain (all early signs of AS) with physical therapy, anti-inflammatory pills and cortisone shots. By 21, the pain in the morning was so severe my eyes would well up with tears before they were even open.  Some mornings I would get out of bed to find the lower half of my body not working – the result was usually an incredibly, ungraceful face plant.  Dressing myself in the morning was frustrating and unbelievably painful. Imagine trying to dress yourself without being able to move your spine or your hips.  Experiencing amazing amount of pain if you did manage to move them.  The constant day-to-day pain and the increasing difficulty walking brought me emotionally to an all time low.  I was 21 and waddled with the stiffness of a 90-year old woman. It was around this time that this same primary care doctor called to tell me that he had no answer as to why I was in pain, but he was going to stop all prescriptions and suggested I should see a psychiatrist to discuss the pain.  A psychiatrist! A psychiatrist! In disbelief, I slammed the phone on him and just sobbed. If my brain is causing this much pain the only reasonable explanation was that I must be COMPLETELY and UTTERLY INSANE. 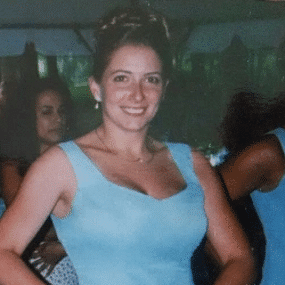 For the next 4 years I carried my old x-rays from doctor to doctor looking for any answers. I continued going to physical therapy and pain management doctors with little to no improvement.  By 25, I was drowning in debt from medical bills and had given up on ever finding an answer for my pain.  I was so tired of hearing all the lame excuses a doctor gives when they have no idea what is happening.  They had me convinced that there simply wasn’t an answer, no one could help and maybe, just maybe I was crazy enough to have some how cause myself this pain.  Sleeping and walking were becoming a luxury or a privilege that I was no longer allowed to have. That year a family member happened to meet a well-respected orthopedic surgeon who agreed to do whatever he could to help.  The very first time I saw this doctor, he did ONE THING different from all the others; he took a new x-ray and immediately had my answer.  The surgeons exact words were “You have more arthritis than an eighty year old woman confined to a wheelchair but that is not the big problem.  There are major physical changes to the joints on both your hips and lower spine.” He said he “could surgically correct the problem but the same problem will reoccur.” The surgeon ordered some blood work to confirm but he was sure we had found our answer. After him, every single doctor who looked at the x-rays and the blood work agreed.   I had a ‘textbook case of Ankylosing Spondylitis’ except that was a young woman.  Then each doctors explained the same cold hard facts; there is no cure… no one really knows what causes it or how to stop the progression … it will eventually leave me crippled and deformed.   But they could treat the symptoms, which would make me a little more comfortable.   I was so relieved that at last I had an answer and devastated at the same time as each plan I had made for my future were flying out the windows one by one as doctors described what lay in wait for me.  Completely overwhelmed, but with the next statement I could almost hear my world shatter “at this rate you will be in a wheelchair by thirty”.

I was diagnosed in 1999 at the age of 25 and the years that follow mirror anyone else who suffers from Ankylosing Spondylitis.  Weeks, months and even years of debilitating flairs and inflammation in places you didn’t know could become inflamed.  Dealing with the never-ending flow of new and often-scary disorders that accompany AS.  I find myself using x-rays, c-scans, and MRI reports as a ‘score card’ of sorts, measuring how effective I have been in my fight.   I have read everything I can get my hands on, tried almost every form of alternative medicine and spend every waking moment fighting the pain and progression of AS.  I did manage for quite some time to live with the outside appearance of a normal life but over the years my fight has had numerous setbacks and small defeats.  Now, I do not fight with any false assumption of winning the war but rather I fight to ‘hold the line’.  With the constant help and care of a great doctor I am still able to fight without a wheelchair.  With the love, support, patience and humor of wonderful friends and family, I get through each battle one day at a time.   Over the years I have had to recreate my goals, my dreams, and even my career to reflect a new meaning of ‘quality of life’.

I am not writing this in search of pity, I do not want or need it.  As a matter of fact, when I am struggling to move with as much normality as possible, your pity is a blatant reminder that I am failing.  I am however writing this because I would like the words “Ankylosing Spondylitis” to not provoke a completely clueless and bewildered look on everyone’s face.  I would like people to understand that if you can’t see my disease by looking at me it is only because I have been fighting very hard every day to keep it that way, but I am slowly losing.  So your looks of skepticism or lack of understanding is incredibly frustrating.

I am putting my face on this wall to remind all the under educated, narrow-minded doctors that YES women under 25 years old, who have never had children can have Ankylosing Spondylitis.

Most of all I am voicing my story because I rely on the wonderful online communities of AS sufferers.   Their help, encouragement, and support has given me courage and strength when I need it the most. They understand in a way that no one else can because they live it and because I do not want to lose another friend to this disease without you knowing about all of them.  If life is going to get better for any of us, we are all going to have to yell together.  So I will follow the brave people before me, come out of the shadows, and stand tall in the hopes that the next generation might get a diagnoses quicker, have better treatment and maybe even a cure.

My name is Carrie Bonin