My name is Gillian and I have been living with Ankylosing Spondylitis all my life, one way or another. As a child, I was aware my dad wasn’t the same as other dads, he was bent right over, completely stiff and had trouble looking in a forward direction. All I was ever really told as a child was “your dad’s got a bad back”. 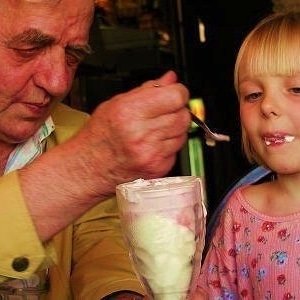 Dad gave up his job as a qualified builder (having previously done a 7 year apprenticeship) when I was at junior school and got factory work where he ended up in a supervisory role. Fortunately for him, his employer was very accomodating and here he stayed, working his way up to manager, until he was able to take early retirement at 63.

In the summer of 74 When I was in my teens, my dad had radical surgery to correct the curvature in his spine. this involved having his spine broken and reset, wedges of bone taken out of one side and inserted into the other. this was then all held together with a metal plate and he was plastered up like a turtle for 6 months.

Dad hated being in hospital, being immobile and being away from the family. One Saturday morning, when my mother was hoovering, he phoned her to say he had discharged himself and come and pick him up. He spent several months sleeping on the sofa because, once he got home, he could not get up the stairs and the bed was therefore out of the question. The consultant later offered to operate on his neck but dad thought it was too much to go through twice so although his back was straight, he was still with a curve in the neck that was to subsequently get worse.

Dad never let his AS beat him, he used to take us camping and although it was very painful to sleep in a tent, he did it. A keen fisherman, he gave up coarse fishing to take up fly fishing for lake trout to keep mobile. My mother used to do the driving, the garden and the shopping whilst dad did the cooking, dusting and washing at weekends so between them they used to keep a normal house, just dividing up the chores a bit differently to before.

Dad never really used to talk about his condition, so much so that I never really knew what it was called. I remember travelling home from a visit to a friend in Scotland and stopping for a coffee, seeing the term Ankylosing Spondylitis on a poster in somebody’s window and wondering what it was.

My own health has never been really what you would call perfect. As a child of 12 I recall that I was always having flulike symptoms and time off school. At 15, my hip would become so painful I could not put my foot to the floor. At 18 a routine medical found I had very high blood pressure and I had two really severe kidney infections. It turned out I have one kidney half the size of the other and a “funny blood supply” to it, but they didn’t know why. A road  accident at 27 saw me having a neck x-ray for whiplash, where I was told “you have a funny cervical spine” but I was so relieved it was otherwise unscathed, I never really asked what they meant by that. I also had pain in my feet from my teens.

It wasn’t until I was in my 30’s that I started getting SI joint pain and feeling really sick at times. I changed my stool at work for one that was a very slight bit lower and found it helped with the back pain but by now I was having recurrent problems with my neck which I thought were because of the road accident. I noticed the neck problem came on bigtime after carrying heavy objects, so I tried to limit what I carried.

At 35 I was pregnant with my second child. because of the renal problem I had her by emergency caesarian section with a spinal anaesthetic that failed, so I ended up having the operation on nitrous oxide, an excruciatingly painful experience you would not wish on your worst enemy. Later on I was to realise that this might be significant.

In my early 40’s I started to get the recurrent flulike symptoms back again….every four weeks or so I would be too ill to function and what with that and the neck I ended up having a lot of time off work, in dribs and drabs. Then there was the hip pain, digestive problems, pleurisy, severe headaches.

When I was 45 years old, my father’s condition had been getting worse for a few years. Unable to walk to the back door without being severely out of breath due to pulmonary fibrosis and asthma, on top of the fact that his neck curvature was getting worse to the point his trachea was being gradually crushed, he was on oxygen 24/7. He had a stroke followed by pneumonia and kidney failure and died at age 76. Around the time he became severely ill, the penny had started to drop that I might actually have the same condition but it was too much for me to tackle whilst he was so ill,I decided I’d wait till later to get a diagnosis.

Whilst I was still grieving my loss, after having no time off for the illness or death and only one day for the funeral, work started to ask questions about my attendance and in an amazingly insensitive fashion, 6 weeks after my dad died, I was given a disciplinary and told to get a diagnosis or it was going to go further. By this time I was 99% sure I had AS and went to my doctor well prepared, having researched the condition on the internet. He was unconvinced because I had no fusion and no curvature but because I had family history and neck pain, he sent me for an x-ray and blood tests. I couldn’t understand why they were x-raying my lower back when it was my neck that was hurting most but the imaging showed up lower spine abnormalities and the bloods came back HLA-B27+, so I was sent to a rheumatologist who sent me for an MRI and I was diagnosed with Ankylosing Spondylitis 10 months after my father’s death.

6 years on I still have no fusion and no curvature and am still in my job although I have reduced my hours a little bit and they have become a bit more supportive. I was diagnosed with fibrotic lung disease and an enlarged heart last year after having breathing problems which turned out not to be asthma, as had been suggested. I also have arrhythmia and plantar fasciitis in both feet which came on big time after I was asked to wear safety footwear with steel in the toes and soles, so I now wear my own shoes to work in. My biggest problem is fatigue really and I have had some problems with anxiety and depression as a result of the lung diagnosis and other unrelated problems life has decided to throw at me, so I am currently trying out some antidepressant medication.

Last year I decided I wanted to do something to raise money for The Coalition Of Ankylosing Spondylitis Patients, so I set to work on my hobby of mosaics, working every day to make beautiful things to sell at the local annual craft market. I figured dad would have liked it that I was doing something to help other people in the same position as him and me.