A Comprehensive Review Of Psoriatic…

A Comprehensive Review Of Psoriatic Arthritis: Symptoms, Diagnosis, And Treatment.

Dr. Reveille is Director of the Division of Rheumatology and Clinical Immunology at the University of Texas, Health Science Center at Houston. He is a leading researcher, and a long-standing member of SAA’s Medical and Scientific Advisory Board.

Psoriatic arthritis (PsA) is an inflammatory arthritis occurring in the setting of psoriasis, and in the absence of rheumatoid factor in the blood. It is one of the related conditions in the family of spondyloarthritis, and manifests itself in a variety of ways, often very different from rheumatoid arthritis (RA), with which it can be confused. First of all, it tends to involve fewer joints than RA – in fact, it is usually known as an oligoarthritis (that is, involving less than five joints), though some patients can have more joints involved. Second, it is usually asymmetrical in its presentation, with involvement of a joint on one side of the body, as opposed to RA, which is usually symmetrical (involvement of both sides of the body). Third, the joints at the ends of the fingers, called the distal interphalangeal joints, or DIPs, are often involved, which is rarely seen in RA. Fourth, about one-fifth of those with PsA will have involvement of the spine.

Psoriasis, in data from NHANES 2009-2010, occurs in approximately 3% of the U.S. population. The people with psoriasis in this survey had a higher prevalence of low back pain compared to persons without psoriasis in the general population. Some patients can in fact develop spondylitis, inflammatory arthritis in the spine, leading in a minority to spinal fusion. Enthesitis is also commonly seen, which is inflammation at the point where the tendons and ligaments insert into bones. Enthesitis is particularly common around the ankles and feet, and is called Achilles’ tendonitis and plantar fasciitis, accordingly. Enthesitis can also occur around the knees, hips, shoulders and lower back.

It is very important that patients with PsA be identified early, in order to initiate treatments which have been shown to vastly improve long-term outcomes. Many studies have shown that those with psoriatic arthritis (especially those with persistently active disease) tend to have a worse quality of life, progressive joint damage, and premature mortality. Effective treatment started early in the disease course is critical.

There are Diagnostic Criteria for PsA, called ClASsification for Psoriatic ARthritis (The CASPAR criteria).

The CASPAR Diagnostic Criteria for PsA: 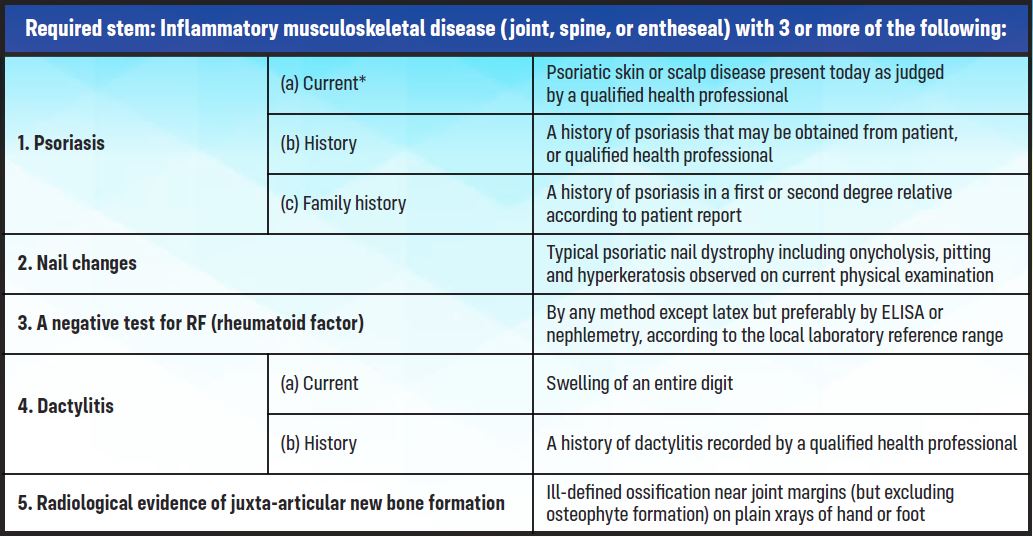 The past few years have seen a number of new medications introduced for PsA. Along with symptomatic treatments, such as nonsteroidal antiinflammatory drugs (NSAIDs), corticosteroids, and local corticosteroid injections into joints and entheses, there are the “classic” oral small molecules (OSMs) such as methotrexate, sulfasalazine, leflunomide and cyclosporine, as well as a new OSM called apremilast. The Tumor Necrosis Factor (TNF) inhibitors have been available for nearly 20 years, and include etanercept, infliximab, adalimumab, golimumab and certolizumab pegol. Newer than this is a medication that inhibits the interleukin 12/23 subunit (ustekinumab). More recently introduced are the interleukin 17 (IL17) inhibitors, which include secukinumab, ixekizumab and brodalumab.Taylor WJ, et al. Arth Rheum 54: 2665-2673, 2006

Also recently approved is a medication called abatacept that blocks the CTLA4 molecule, which is very important in inflammation, and most recently tofacitinib, which is an inhibitor of other inflammatory molecules, namely JAK1 and JAK3 and can be taken by mouth. All of the above-named medications, except apremilast and the IL17 inhibitors, are also used to treat rheumatoid arthritis.

Recent guidelines for the treatment of PsA have been put forth by the American College of Rheumatology (ACR) and the National Psoriasis Foundation. A great deal of work went into the development of these guidelines. Separate committees of “experts” in PsA were established for 1) drawing up the treatment guideline questions to be addressed; 2) reviewing all the available literature on each treatment, and determining the scientific quality of the evidence published; and 3) voting on the answers to the treatment guideline questions once the results of the literature review were presented. A method called GRADE (Grading of Recommendations Assessment, Development and Evaluation) was used to rate the quality of the evidence. The GRADE method has been used in the treatment guidelines put forth by the ACR for other rheumatic diseases, including those for ankylosing spondylitis and non radiographic axial spondyloarthritis (where damage is not visible on x-ray) which were created in conjunction with the Spondylitis Association of America and are currently being updated.

A Review Of The Updated PsA Treatment Guidelines

Let’s start with the patient with active PsA who is presenting for treatment for the first time. Although a number of clinical trials have been published, the actual evidence for these treatments was felt to be of low-to-very-low quality in this category according to GRADE methodology, so their recommendations are conditional. TNF inhibitors are recommended over oral small molecules (OSMs) such as methotrexate, sulfasalazine, leflunomide, cyclosporine or apremilast. OSMs, especially methotrexate, could be used instead and are preferable to NSAIDs and should be considered before starting IL17 inhibitors or IL17/IL23 inhibitors. IL17 inhibitors may be preferable in those patients with severe psoriasis occurring at the same time or who have contraindications to TNF inhibitors such as congestive heart failure, recurrent infections, or demyelinating disease such as multiple sclerosis. 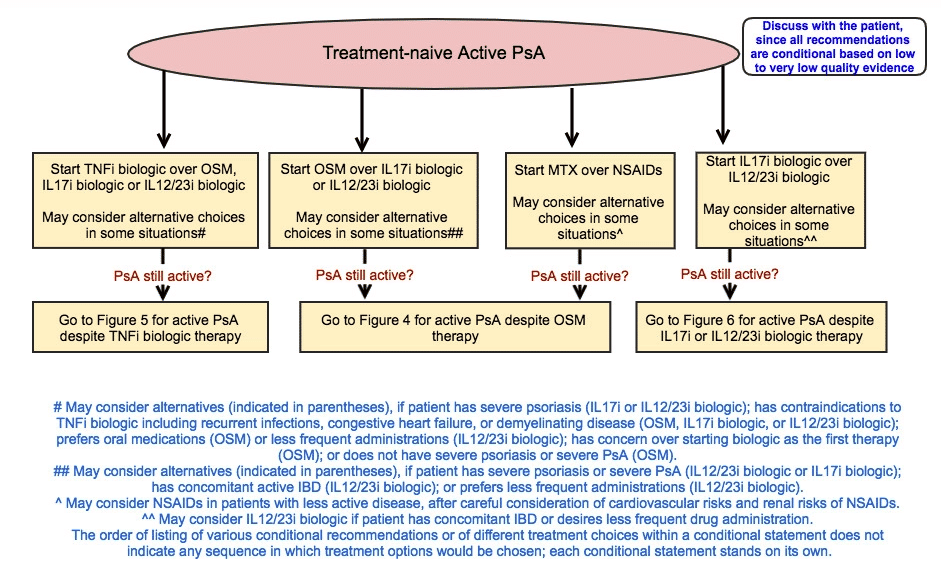 For those patients who have active PsA despite OSM treatment, the use of a TNF inhibitor is recommended over trying another OSM. Again, if there is severe psoriasis present or a contraindication to using TNF inhibitors (as noted above), an IL17 inhibitor is recommended instead of going to an IL12/23 biologic, abatacept or tofacitinib. If there is a contraindication to using IL17 inhibitors, such as active inflammatory bowel disease or recurrent candida infections, an IL12/23 inhibitor is recommended over abatacept or tofacitinib. Abatacept is desirable for those with recurrent infections on other biologics. And of course, if the patient insists on taking oral medications only, then tofacitinib, which is taken by mouth, could be considered. 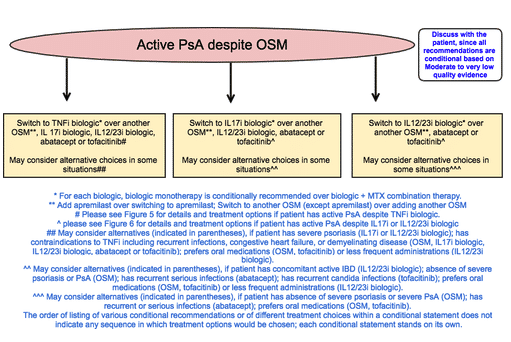 For those with active PsA despite using a TNF inhibitor, it is recommended that another TNF inhibitor be tried first before trying another OSM, an IL17 inhibitor, an IL12/23 inhibitor, abatacept or tofacitinib. As above, where there is severe psoriasis or contraindications to using TNF inhibitors, then an IL17 is recommended next. Where these too are contraindicated or there is little psoriasis present, an IL12/23 blocker is recommended over another OSM, abatacept or tofacitinib. Of course, there is still the issue of the patient preferring to stick to an oral medication, in which case tofacitinib would be considered. The recommendations for this category were “conditional” based on the moderate-to-very-low-quality of the evidence.

Of course, these guidelines would be incomplete without discussing nonpharmacologic measures such as physical therapy, occupational therapy, weight loss where needed, exercise (low impact exercise recommended over high impact exercise) and, most of all, stopping smoking. However these recommendations, though strong and not conditional, were based on low-quality evidence except for smoking cessation, for which the evidence was of moderate-quality. 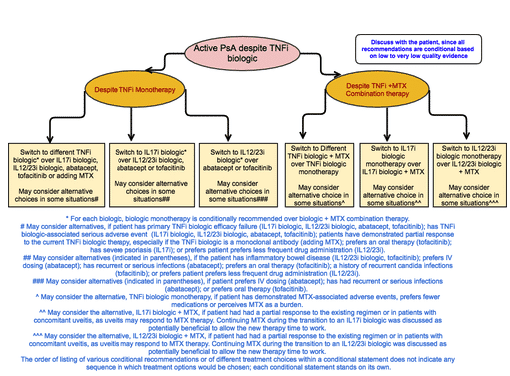 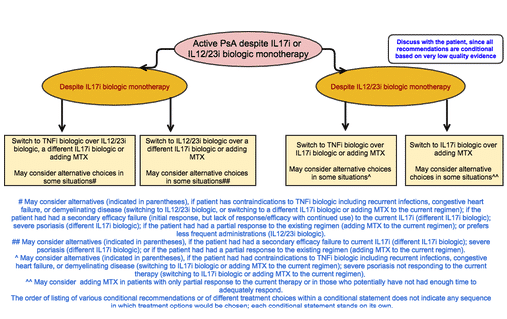 The main purpose of these guidelines is to assist patients and their health care providers in planning a treatment strategy. Clearly better evidence is necessary, and it is my hope that ongoing research and clinical trials will provide stronger and more compelling evidence to help in revising these guidelines in the future.

You will find the full manuscript online, here: