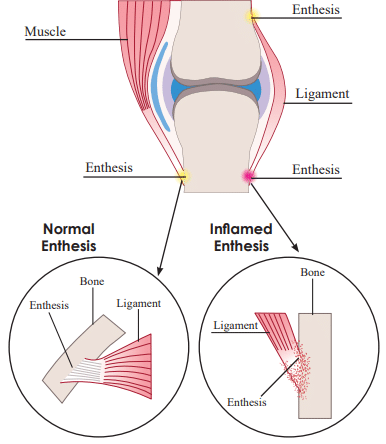 People with Spondyloarthritis (SpA) know very well that their bones and joints hurt in areas around the body (called “enthesitis”) often in places that are subject to pressure from daily activities such as sitting, walking, or standing. Over the years researchers have tried to understand what causes these problems, and it was only recently with advances in imaging (such as MRI and ultrasound), studies in animal models of SpA, as well as in genetics that a clearer picture exists as to what this is. Although we do not know precisely what causes it (we do have theories) or exactly how to treat it (the biologic drugs help), we are getting close to a better understanding of what it is exactly. Insertions of tendons and ligaments into bone are called entheses; it is here – where the hard and soft tissues meet – that represent areas of concentrated physical stress, and sites of repetitive biomechanical impact.

Researchers have shown, predominantly in animal models of SpA, that these areas, when stressed, create an inflammatory cascade of cytokine production with infiltration of inflammatory cells into the surrounding structures. Additional data collected in these studies do show that adjacent bone tissue reacts as if it is repairing an injury and subsequently produces new bone just as if a fracture had occurred. Understanding the pathways that are involved in these relationships (inflammation, injury, repair, etc.) is the subject of current research efforts both in humans and in animal models. It does appear that not only mechanical forces, but genetic predisposition also plays a role.

With the use of advanced imaging techniques in patients with SpA we are learning, for example, that these same factors may also play a role in the spinal damage that occurs in AS. There might be certain areas of the spine that are subject to more stresses than other areas, and these situations may lead to the advanced bone changes in the spine that we see in more severe disease. Finally, the concept of “enthesitis” is being linked to outside or environmental triggers such as certain bacteria residing in the gut which, in some patients genetically predisposed, can produce these unwanted features of the disease.  Since “enthesitis” can occur in patients with inflammatory bowel disease (who already have an abnormal intestine structure), we are learning more about why it might occur in SpA.

Not surprisingly, there have been attempts to treat enthesitis with agents that block the cytokines that are felt to play a role in the condition, such as TNF, Il-22, IL-17, and IL-23. Preliminary work in this area is promising but more needs to be done. A more complete role for biomechanical stress and genetic predisposition awaits additional data from safely applied new imaging techniques as well as advances in gene sequencing and discovery.

Did You Know? Enthesitis can occur in IBD (Inflammatory Bowel Disease) patients who do not have spine or sacroiliac joint involvement. Though we don’t have complete information on how often this occurs, some studies have shown a very high prevalence of ultrasound abnormalities in those with IBD. This area is incompletely studied and in need of further investigation.