Standing Tall For Women With…

Historically this disease, and especially ankylosing spondylitis (also known as axial spondyloarthritis (axSpA) with x-ray damage) was thought to affect men more commonly than women. However, over the last decade as we recognize the disease earlier and in patients without the classic damage seen on x-ray, we realize this disease is actually equigender. Despite this, women continue to have a significantly longer delay in diagnosis compared to men. This may relate to persistent under-recognition of the disease (in general and in women particularly), and that women tend to have less damage on x-rays compared to men as well as less measurable inflammation in the blood (by C reactive protein [CRP]). Notwithstanding these differences, female patients have higher reported disease activity, proportionally greater functional impairment (ability to do certain daily activities), and worse quality of life.

When female patients eventually make it to the rheumatologist and are given a correct diagnosis, they have often previously been misdiagnosed. The most common incorrect diagnoses are fibromyalgia (though this can coexist with AxSpA), chronic back pain, and foot pain. Affected women tend to have more peripheral (of the arms and legs) joint involvement and a higher prevalence of inflammatory bowel disease compared to men. They often report more family history of spondyloarthritis, though this doesn’t necessarily mean the genetics are different in women. It could reflect a tendency towards women’s greater knowledge of her family history. Fewer women have significant damage on x-rays at diagnosis (AS); over time, fewer women develop bamboo spine (fusion or ankylosis of the spine). 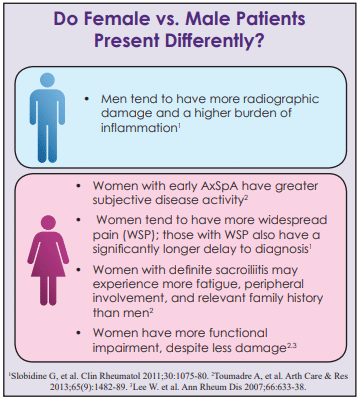 An important area to understand for both female patients and for researchers is what happens to women in pregnancy. This is especially important as the disease starts in the woman of childbearing age, such that most patients will have the disease when they become pregnant. Emerging data suggests heterogeneity in disease activity in pregnancy. Individual patients may actually feel better in pregnancy, though the literature reports results at a group level so the following information does not suggest this course will happen to the individual patient reading this article. Most patients report low disease activity before pregnancy, but there is a more variable course over the three trimesters, with a suggestion of increased disease activity from week 20 through the third trimester. It may be that pregnant patients stop taking their medications when they find out they are pregnant and therefore disease activity increases. It may also be that the mechanical loading of pregnancy contributes to disease activity. Studies suggest those women needing a biologic before pregnancy are more likely to flare during pregnancy if they stop their biologic. When disease activity increases in pregnancy, patients are more likely to have problems with gestational diabetes, preeclampsia, infection, preterm labor, preterm deliveries and small for gestational age babies. Another important finding is that axSpA patients tend to have more elective cesarean sections. It is important to note that most axSpA patients should not require a cesarean section, and in fact the Microbiome that the baby picks up as they descend through the birth canal may be important in decreasing the infant’s risk of autoimmunity in the future. Most studies suggest that disease activity increases in the post-partum state, but it is unclear how much of this relates to lifestyle change (less sleep and exercise) and more stress.

Treatments for axSpA are not different between men and women, except in the setting of pregnancy. Physical therapy is the cornerstone of non-pharmacologic therapy and most patients should get referred for a course when first diagnosed. First line pharmacologic therapy is a Nonsteroidal Anti-inflammatory Drug (NSAID) and when this class does not work or work well enough, or if it is not tolerated, then biologics are recommended. The biologic class currently recommended as first line is the Tumor Necrosis Factor inhibitors (TNFis), though another more recent class, called Interleukin 17 inhibitors (IL-17i) works well too.

In the pregnant state, NSAIDs are contraindicated in the third trimester and though they can be taken early in pregnancy, they are not strongly recommended. There is some animal data (not human) suggesting NSAIDs interfere with implantation (getting pregnant) and human data suggesting an increased risk of miscarriage with NSAID use early in pregnancy. Specific NSAIDs like celecoxib are not recommended in pregnancy. Though we do not recommend traditional medications like methotrexate (rheumatrex), leflunomide (arava) and sulfasalazine in AxSpA treatment, they are nevertheless sometimes used in patients. Methotrexate and leflunomide are strongly contraindicated in pregnancy and are associated with fetal malformation and birth defects.

Sulfasalazine is safe in pregnancy, though higher doses of folic acid supplementation may be warranted. TNFi are being used more and more in the pregnant state. In fact, one of them in particular, certolizumab pegol (Cimzia), does not cross the placenta or into breast milk and has a pregnancy indication. In general, TNFi are especially safe until 20 weeks. From 20 weeks on, the placenta starts to build the baby’s immune system by avidly transporting antibodies from mother to baby. This includes drugs that are antibodies like the TNFi (except certolizumab). It is recommended that if TNFi other than certolizumab are used, they are stopped before the third trimester, whereas certolizumab can be continued though the duration of pregnancy. The major issue is that once the antibodies (and drug) cross the placenta, they remain in the baby’s system for months after delivery and at a higher dose than the mom’s own drug level. In theory this would increase the baby’s risk of infection, though studies have not suggested this. It may be that patients are stopping their biologic early enough in pregnancy to prevent this exposure. Most importantly, if a fetus has been exposed to a biologic, especially in the second trimester, live vaccines should be avoided for the first six months of life.

We would strongly encourage moms provide breast milk to their infants if possible. Certain drugs are contraindicated when breast-feeding. Similar to pregnancy, methotrexate and leflunomide are contraindicated. Sulfasalazine is safe, though should be stopped if a baby is preterm and jaundiced for one to two months. NSAIDs are generally thought to be safe with lactation, though those with a shorter half-life are preferred especially as the baby’s gastrointestinal system matures. Very little of this class is excreted into breast milk. The American Academy of Pediatrics recommends the following NSAIDs as breastfeeding compatible: ibuprofen, indomethacin, diclofenac, naproxen, piroxicam, ketorolac, and tolmectin – though this is mainly based on expert opinion and some observational data. Another likely safe option is celecoxib, which was not recommended in pregnancy.

TNFi are the best studied of the biologic class in pregnancy. Babies born to mothers taking TNFi do not have an increased risk of congenital malformations and there is no association with preterm birth or babies born small for gestational age. Similar to pregnancy, certolizumab pegol minimally crosses into breast milk and is completely safe during lactation. In general we worry less about biologics and lactation. The reason for this is that the biologic is really a protein. A patient taking it as a drug injects it and does not ingest it (by mouth) for absorption. When the baby sees the fractional amount in breast milk, they likely break it down like a protein and are therefore not seeing it the same way as the mother does. That said, we do not have a lot of robust or long-term data with TNFi except for certolizumab, which has been specifically studied in pregnancy and lactation. The Organization for Tetralogy Information Specialists (OTIS) is an excellent resource for patients taking any medications during pregnancy and lactation. They can be found at mothertobaby.org.

Our great thanks to Dr. Lianne Gensler, who has studied this topic extensively. This past June, Dr. Gensler presented the information contained in this piece to an international audience of rheumatologists and researchers at the EULAR (European League Against Rheumatism) annual conference, in Amsterdam.