“Hi, my name is Wilson McCoy and I have ankylosing spondylitis (AS). I am 71 years old and have had the disease for several years before being diagnosed July 2005.” Too often we hear these words at each support group meeting. The new attendees are coming to gather as much information on spondyloarthritis as they can while the older members of the group are there for support and additional information. I hope the following information will be of benefit to all who have ankylosing spondylitis or related condition.

I would like to begin with a brief history of Tai Chi, which goes back to the Song Dynasty (960-1126 AD). The roots of this balanced art can even be traced back to the 4th century BC. In its early stages, Tai Chi was developed and practiced in Taoist and Buddhist monasteries. Combining focus on health, meditation and martial arts, this form of exercise sought to create mental and physical balance for the trainee. Although Tai Chi’s benefits seem clear today, it did not gain widespread popularity as a healing exercise until the early 20th century.

Tai Chi is many things but perhaps can best be described as a form of slow, soft and graceful physical and mental exercise combined with breathing and relaxation techniques. It is truly a holistic (mind, body and soul) approach to exercise. The surroundings, music, clothing, and time of day are considered to be of equal importance, but still, Tai Chi can be done by anyone anywhere.

“I needed to find a way to keep my body and mind in shape.”

Regular practice of Tai Chi, being a low-impact to no-impact mind-body exercise, has been found to provide significant health benefits such as an increase in energy levels, as well as an increase in flexibility and joint movements. It strengthens the cardio-pulmonary system, increases muscular strength, improves mental focus, improves balance – thus reducing the chance of falling, detoxifies the body, reduces the chance of back pain by relaxing the back and hips, and promotes better sleep. With all of these benefits, why is everyone not playing Tai Chi? (“playing” is the Chinese term for practicing Tai Chi)

In the mid-1980s my back pain became severe enough to require a regular dose of NSAIDs. Multiple steroid shots seemed to help for a short time but the pain always returned. Still, I would have no answers for the next 20 years. Finally in July of 2005, I was diagnosed with ankylosing spondylitis. I was relieved to hear what the problem was but yet worried as to how to manage it for the rest of my life. More frightening was the fact that there was no cure for the disease. After wearing a Miami “J” cervical collar for 18 months, I decided that surgery was the only solution to the pain and thus had my C1-C6 fused in November of 2006. In 2007 my rheumatologist started me on one of the biologics.

Having AS limited my physical activities.  I have been a Registered Professional Land Surveyor since 1971 working in the field throughout the United States and foreign countries. Being inactive was not my style. I needed to find a way to keep my body and mind in shape. During much of my research for solutions, I kept running into the words ‘Tai Chi’. Was this what I had been looking for? I signed up at our local recreation center that was starting a Tai Chi class for seniors. This was a turning point for me.

The first few weeks were doable, that is to say, I was able to perform some of the movements after much practice but still had limitations because of my cervical fusion. My sifu (teacher) worked with me knowing that I had limitations. He told me, “In Tai Chi, an individual needs only to do what they are able to do. Do not force your body beyond its limits.” True, I could not lift my leg as high as the Radio City Rockettes, but over time I got half way there.

During the first few months, I was able to achieve balancing on one leg while kicking the other to the front or side. I kept practicing until I was able to perform the 8-Step Form, which is a form designed for seniors. Since then I have been learning additional Tai Chi forms and movements.

I have learned how to stand erect. I have been able to increase the strength in my legs. Walking short distances poses no problems anymore. My balance is just as good as it was 30 years ago. A couple of years back, my grandsons were helping me put some boxes in the attic. I was up there with them in the way.  As I stepped to the side to give them more room, I missed the decking I was moving for… Think you can see where this is going? Wrong!  Having played Tai Chi for a couple of years by then, I knew I was in trouble and what I had to do. I shifted my weight immediately back to my stable foot and lifted my misguided foot before it went through the sheetrock ceiling. My foot did slightly hit the sheetrock leaving a thin crack which is still there today as a reminder to stay out of the attic.

In 2011, I developed pneumonia and two pulmonary embolisms in my lungs putting me in the hospital. I believe that my experience and practice of deep-breathing exercises learned in my Tai Chi classes shortened my stay with a quick road to recovery.

I still maintain a fairly high energy level allowing me to continue working in my yard when the weather permits and continue doing many of the things that I have enjoyed over the past half century.  I feel that Tai Chi has changed the way I look at life. Through the exercise, I’ve learned that those with disabilities can adapt their lifestyle and still continue fulfilling their dreams.

If you do decide to try playing Tai Chi, be sure to check out your instructor.  There are many out there but not all are proficient in Tai Chi.  If you learn from a Master or Sifu you should be in good hands.

I still practice Tai Chi as often as I can, anywhere from 5-45 minutes at least 4-5 days a week.

A couple of years ago, I was asked to teach Tai Chi to our special needs Sunday school class. I felt that this was an opportunity to expand the art of Tai Chi in a different direction. I prepared a modified version of the 8-Step form for the class which proved to be a great success. I did have some challenges in that two of the students had difficulty in standing for any length of time, but we worked around that by taking breaks during the 1-hour class.

Watching these kids working at something they had never done before and achieve success was very rewarding. I felt that by modifying the form to a seated position, I would be able to reach many more students. This started me on a yearlong journey to write the “Seated T’ai Chi – Yang Style T’ai Chi Seated Workbook”.  The workbook is based on the book “Tai Chi in a Chair” by Cynthia Quarta. With her permission, I was able to use some of her material as a base for the book which I dedicated to these special needs children.

I currently teach a seated Tai Chi class in a 55+ community here in The Woodlands, Texas and continue to assist my Sifu as an Instructor.

Editor’s Note: The following are two exercises from Wilson McCoy’s Tai Chi workbook. If you are interested in additional information or ordering the workbook, please send Wilson an email at hwmac43@gmail.com. All profits will go to The Woodlands United Methodist Church Special Needs program.

Repetition of this movement will bring a considerable amount of energy to your hands and will bring your body into balance.

Begin by sitting with your back against the back of the chair. Legs should be shoulder-width apart, feet flat on the floor. Tuck your hips under slightly and curve your shoulders inward without hunching. Hold your head lightly on your neck as though it were suspended by a string from the ceiling.

Imagine the electric currents passing between your hands as you pass one over the other.

Seven on each side. 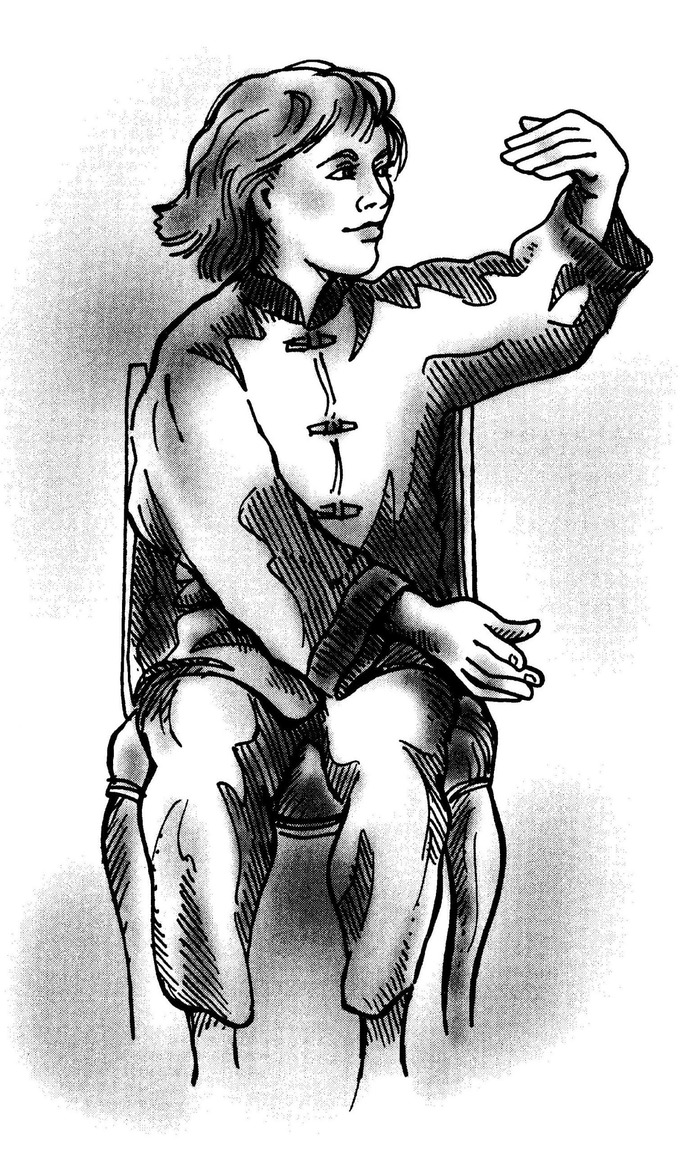 Strengthens shoulder and upper arm muscles and trims the waist.

Begin by sitting with your back against the back of the chair. Legs should be shoulder-width apart, feet flat on the floor. Tuck your hips under slightly and curve your shoulders inward without hunching. Hold your head lightly on your neck as though it were suspended by a string from the ceiling.

Imagine that you are brushing puffs of clouds from in front of your face, chest and abdomen.

Fourteen waves sweeping from side to side.