How Disease Severity, Ethnicity, and…

An interview with rheumatologist, researcher, and long-standing member of SAA’s Medical and Scientific Advisory Board, John Reveille, MD

We know that the HLA-B27 gene – which is the most well-known, and currently thought to be the most significant gene in spondyloarthritis (SpA) – is more common in those who have SpA than in those who do not have the disease. As such, the gene can be one clue to physicians in diagnosing SpA.

We also know that disease severity varies between different populations. But what do we know about the reasons behind this? Does the HLA-B27 gene play a part in disease severity? What other factors may be at play?

We sat down with Dr. John Reveille to discuss these and other issues during a fascinating interview. Our thanks to Dr. Reveille for his time and the knowledge he shared!

Spondylitis Plus: I’d love to start by reviewing what we know about the HLA-B27 gene’s prevalence in various ethnic groups. Where it’s higher, and where it’s lower.

Dr. Reveille: Absolutely. It varies quite a bit in different groups. I can make a broad statement that basically the further you are from the equator, the higher the frequency of HLA-B27. At least in the Northern Hemisphere. In the Southern Hemisphere, that correlation doesn’t hold so well. 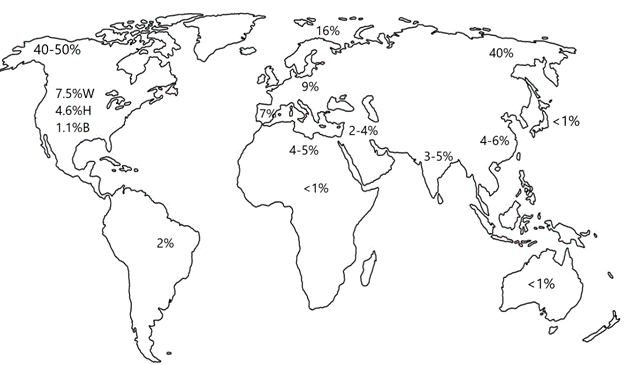 Dr. Reveille: Yes, absolutely. You’re now asking about odds ratios (OR). We published a paper just last year, in 2019, in the Annals of Rheumatic Diseases, from which I’ll share a slide.

A little sidenote here first, though. There are over 200 HLA-B27 subtypes (or alleles), which are really just HLA-B27 genes that differ from one another by a few amino acids. The main subtype, HLA-B27-05, came from Africa when our ancestors came from Africa. That’s the oldest subtype. And all the others evolved off of that. Some subtypes are more closely associated with SpA. This can also vary by region, as you’ll see in the slide. But that’s really outside the scope here, and most people won’t know which subtype they have, if they have the gene.

Please see, “HLA-B Allelic Associations with AS in Three Ethnic Groups.” I really want to focus on the OR values here. 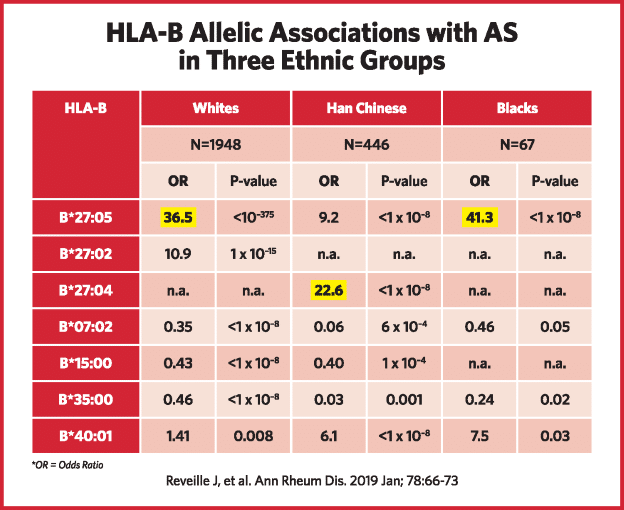 OR on the slide means odds ratios. That means how likely you are to have ankylosing spondylitis (if you have this gene) compared to someone who doesn’t have that particular gene. The higher the odds ratio (OR value), the stronger the association.

So for example, compared to someone who’s HLA-B27 negative, if you have HLA-B27-05 and you’re white, you’re 36.5 times more likely to have AS than another white person who doesn’t have the gene. So you see there that the B27-05, and to a lesser degree B27-02 alleles are associated with AS in whites. We’re looking at the one with the strongest association, which is the B27-05.

For African Americans, the HLA-B27-05 is by far most strongly associated with AS, and that association is very strong with an OR value of 41.3. So if you’re HLA-B27 positive and you’re African American, you’re 41.3 times more likely to have AS than another African American person who doesn’t have the gene.

Now this is only looking at AS and HLA-B27 associations specifically. The associations with all of axial SpA (which would include nr-axSpA) might be slightly weaker across all ethnicities, but very similar.

Spondylitis Plus: In some cases, could testing for the gene actually be counterproductive and contribute to a longer delay? Can we look at the real-world implications for testing for the gene for an African American person with suspected AS, knowing that there is a 40% chance of being negative while still having AS? Or for someone of Middle Eastern ancestry, with lower odds of being HLA-B27 positive?

Spondylitis Plus: Switching gears just a bit, what do we know about psoriatic arthritis (PsA)? What is the strength and role of HLA-B27 there?

Additionally, there are a series of papers that have come out in the past 10 years that have actually shown that those with PsA who are HLA-B27 positive tend to have specific disease features. They have a higher likelihood of having axial disease, sacroiliitis, dactylitis, and enthesitis. And they may also tend to have more severe disease.

Spondylitis Plus: Can we focus more on disease severity and how it varies between different groups? Do we know where the differences are and to what we might attribute those differences?

Spondylitis Plus: Yes, this is a study you co-authored, “Ethnicity and disease severity in ankylosing spondylitis: a cross-sectional analysis of three ethnic groups” by Jamalyaria, et al. which was published in 2017, in Clinical Rheumatology. The study found that African Americans had the worst outcomes in each of the measured areas, including functional impairment, disease activity and severity, and the highest inflammatory markers.

So why is that? Why do we see African Americans having the worst outcomes and most severe disease?

Dr. Reveille: We really don’t know for sure. It might be socioeconomic factors, including access to healthcare issues and inequities. African Americans in the study actually had shorter disease duration than the whites did, so that wasn’t it, but it might be the fact that the whites were more likely to be able to get TNF blockers. Whites had the highest TNF inhibitor usage in the study.

But much more information and follow up studies are needed to understand these factors and the reasons why. This is the first and only paper published in the U.S. that’s ever looked at this. There are some papers from Africa, but in the U.S. focusing on African Americans specifically, this is the only paper that’s ever looked at this. We just really need more research on this topic.

Editor’s Note: We will include content from part two of our interview with Dr. Reveille, discussing gender and sex differences in spondyloarthritis, in our spring 2021 issue of Spondylitis Plus. Please keep an eye out for that article. 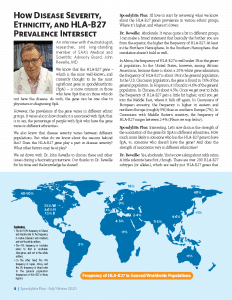 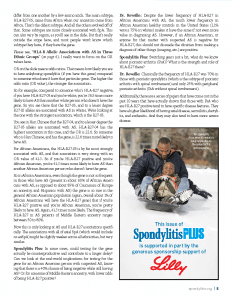 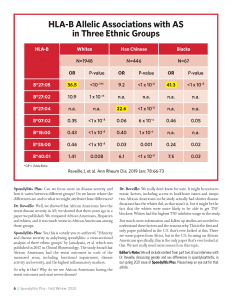 By: Spondylitis Association of America
Tags:
Please Login or Register to post comments