JAK Inhibitors: A New Treatment Option on the Horizon for Spondyloarthritis

Biologic medications, including TNF inhibitors (TNFi) and interleukin-17 (IL-17) inhibitors, have changed the face of treatment for spondyloarthritis (SpA), slowing disease progression and improving outcomes for countless people living with the disease.

But a significant number of patients, whose disease activity cannot be managed with nonsteroidal anti-inflammatory drugs (NSAIDs) alone, do not tolerate or respond well to biologics. Thus, there is still a considerable number of people living with SpA whose disease activity cannot be controlled with currently approved medications. For this population, there is still an unmet need for other effective treatment options.

Janus kinase (JAK) inhibitors, also known as JAKi or JAKinibs, are the latest class of synthetic (non-biologic) disease-modifying anti-rheumatic drugs (DMARDs) that have been proven effective in clinical trials in the treatment of multiple forms of arthritis, including psoriatic arthritis (PsA) and ankylosing spondylitis (AS).

Not only is it exciting to have a new treatment option for AS under consideration by the FDA, but its delivery mechanism may be a welcome change for those accustomed to injections and infusions: JAK inhibitors are taken orally as pills.

These medications specifically target the JAK family of enzymes, namely JAK1, JAK2, JAK3 and tyrosine kinase 2 (TYK2), each of which are involved in the initiation of the signal for a cell to make more than 60 different cytokines and growth factors.

Unlike biologics, which inhibit the effects of one single cytokine, JAKi can block the effects of multiple cytokines that are implicated in the pathogenesis (development) of many immune-mediated rheumatic diseases, including AS. They have a shorter half-life compared to biologics, meaning they are active in the body for less time, which means if they are discontinued, any side effects will disappear in a swifter fashion.

The JAKi are just as effective as biologic medications in the treatment of rheumatoid arthritis (RA), with some recent research reporting even superior results with JAKi as compared with adalimumab (Humira) in terms of some clinical and functional outcomes. To date, three JAKi are approved in the U.S. for use in patients with RA: Pfizer’s tofacitinib (Xeljanz), a pan-JAK inhibitor; Eli Lilly’s baricitinib (Olumiant), another pan-JAK inhibitor; and AbbVie’s upadacitinib (Rinvoq), a selective JAK1 inhibitor. The 2021 ACR guidelines for the treatment of RA consider JAKi a viable second-line treatment option in patients who have an inadequate response to methotrexate alone, on equal footing with TNFi and non-TNF biologics.

Following FDA approval of tofacitinib in 2012 as the first JAKi indicated for RA, three JAKi medications – tofacitinib, filgotinib, and upadacitinib – have also demonstrated efficacy in patients with various forms of SpA. Most of these trials were conducted in patients with PsA, and as such, tofacitinib has already been approved to treat PsA in the U.S. and Europe. Upadacitinib has also been approved for PsA and more recently for AS in Europe, and an application has been filed with the FDA for this indication in the U.S.

Currently, treatment options for axial spondyloarthritis (axSpA) are limited, compared to those for RA and PsA. NSAIDs remain the recommended first-line medications; if symptoms are not relieved by NSAIDs, monoclonal biologic drugs, such as TNFi and then IL-17 inhibitors are prescribed. However, about 30% of axSpA patients do not respond adequately to these medications. JAKi may provide a new therapeutic avenue for these axSpA patients.

Upadacitinib, tofacitinib, and filgotinib have been studied in clinical trials in AS, and all have been shown to be effective in treating signs and symptoms of the disease. However, filgotinib is no longer being pursued for the treatment of axSpA, since the FDA rejected its application for RA due to safety concerns.

In the tofacitinib trial, 56% of patients in the active treatment group who received 5mg of tofacitinib twice daily achieved an improvement of 20% or more as measured by the Assessment of Spondyloarthritis International Society criteria (ASAS 20) after 16 weeks of treatment, compared with 29% of those in the placebo group (who received a “dummy” pill) – a significant difference. ASAS 40 response (an improvement of 40% or more) was also significantly better with tofacitinib (41%) than with placebo (13%). Greater improvements were observed among patients who were biologic-naïve (meaning they had not previously taken a biologic). The efficacy in the treatment group was maintained through week 48 in the trial. A rapid clinical response according to ASAS 20, as early as week two, was seen in the treatment group. Patients treated with tofacitinib also showed significant improvements in other clinical measures and patient-reported outcomes related to disease activity, mobility, function, fatigue, and health-related quality of life, compared with the placebo group.

Similarly favorable results were reported with upadacitinib in the SELECT-AXIS1 trial, where patients who received 15mg daily of the study medication achieved significantly higher ASAS 40 response rates at week 14 than those given a placebo (52% vs 26%). The response was noticed as early as week two and was sustained for more than one year. The treatment group also experienced significant improvements in many other clinical outcomes of disease activity, function, and quality of life, as well as improved MRI scores for inflammation in the spine. Positive results with upadacitinib treatment have also been noted in patients with non-radiographic axial spondyloarthritis (nr-axSpA), with significantly higher ASAS 40 responses at week 14 with upadacitinib (45%) compared to the placebo (23%).

The most common side effects of these medications include minor infections as well as nausea, headache, and occasional diarrhea. Changes in patient bloodwork have been observed with all three JAKi, with some minor differences. These include anemia, lymphopenia, neutropenia, and elevations in liver transaminase, creatine kinase, total cholesterol, and serum creatinine levels (reflecting kidney function). Adjustment of treatment was generally not needed in most patients based on laboratory findings alone.

It’s important to note that these medications currently carry an FDA boxed warning on their label regarding possible injury and death because of more serious side effects such blood clots, heart attack, serious infections including tuberculosis, lymphomas and other malignancies, and gastrointestinal perforations. Because of an increased risk of shingles, a shingles vaccine (preferably Shingrix) is recommended, ideally two to four weeks prior to starting treatment with JAKi, particularly in older and immunocompromised people, as well as Asian populations and those with a prior history of shingles.

In September, the FDA issued a new drug safety report for JAKi, after a review of a large, randomized safety clinical trial of tofacitinib, which included RA patients age 50 or older who had at least one preexisting cardiovascular risk factor. The trial results indicated that treatment with both the 5mg and 10mg twice daily doses of tofacitinib compared with TNFi was associated with an increased absolute risk of mortality, cardiovascular events, stroke, lymphoma, and lung cancer. Based on these data, the FDA has required new and updated warnings for tofacitinib, baricitinib, and upadacitinib due to their similar mechanisms of action and use. The FDA also recommended limiting the use of these drugs to patients with an inadequate response or intolerance to TNFi.

We are unsure whether these safety concerns and FDA warnings would also apply to patients with axSpA, who are more likely to be younger than a typical RA population. Moreover, not everyone in the axSpA population is expected to have a cardiovascular risk factor, like those in the tofacitinib safety study sample.

For now, it looks like FDA approval of JAKi for axSpA is likely to take some time. Still, it’s good news that there are potential new treatment options for these patients on the horizon.

Nurullah Akkoç, MD is Professor of Medicine at Manisa Celal Bayar University in Manisa, Turkey, where he is Chief of the Division of Rheumatology. He specializes in AS research and is past president of the Rheumatology Federation of Turkey.

Muhammad Asim Khan, MD, MACP, FRCP is Professor Emeritus of Medicine at Case Western Reserve University School of Medicine in Cleveland, OH. He is a noted rheumatologist, researcher, AS patient, and long-time member of SAA’s Medical and Scientific Advisory Board.

Click here to read more about spondyloarthritis from the authors of this article in their book, “Ankylosing Spondylitis—Axial Spondyloarthritis.” The book provides evidence-based, practical information on all aspects of axSpA with emphasis on clinical features, pointers for early diagnosis, and comprehensive coverage of current treatment options, including clinical trial data on the latest biologic therapies. Our thanks to Dr. Khan and Dr. Akkoç for sharing their expertise. 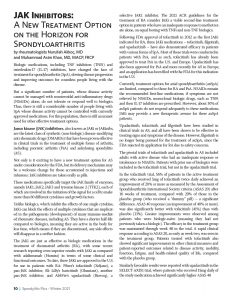 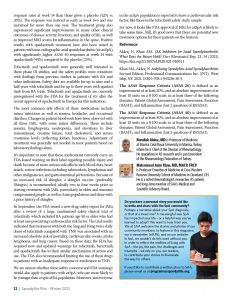 By: Spondylitis Association of America
Tags: